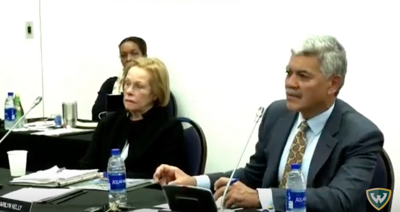 The Wayne State Board of Governors met for a limited-agenda and limited-audience meeting in the midst of the coronavirus pandemic on March 20.

Four governors and members of the president’s cabinet were present by video conference. The meeting was livestreamed to practice social distancing, which the Centers for Disease Control and Prevention advises.

Due to the COVID-19 pandemic, WSU canceled all face-to-face classes. The university is considering student refunds for some services including on-campus dining and housing, President M. Roy Wilson said.

Meal plan refunds “should not be a problem,” Wilson said. A partial refund for on-campus housing fees may be “on the books.” A campus announcement detailing the full plans will be delivered March 22, Chief of Staff Michael Wright said.

“We have not used financial implications at all in terms of any of the decisions we’ve made,” Wilson said. “We have not used that as a basis for how we do things. But at some point we’ll have to tally that up.”

Housing and dining remain open after WSU announced an extension of spring break and the transition to online classes in light of COVID-19 concerns. Dining is carry-out only.

So far, two employees have tested positive for the coronavirus, the university said Tuesday. One works at the David Adamany Undergraduate Library, and the other employee works at the Children’s Hospital of Michigan.

According to the state of Michigan website, there are currently 549 cases of COVID-19 in the state.

Chief Financial Officer Rebecca Cooke said the pandemic circumstances may also affect budget planning. The budget may not be finalized until September, due to financial “uncertainties,” she said.

Code of conduct disputed and passed

The BOG discussed the new draft of a code of conduct that state officials, such as Gov. Gretchen Whitmer, urged they approve.

BOG member Michael Busuito, a plastic surgeon based in Troy, said he didn’t approve of the meeting being held in the middle of a pandemic.

“I openly oppose holding this meeting at the height of a national health emergency that is due to the worst healthcare crisis in our lifetime,” Busuito said. “Wayne State University has done just fine without a code of conduct for 150 years. There’s nothing to justify meeting under these circumstances.”

The governors sparred over the code’s third bullet point, which reads: “I respect the opinions of others while reserving the right to my opinions and avoid any derogatory public comments in criticism of other Board members, the President, or the staff.”

The dissenting governors said the language infringes on their First Amendment rights and duties to the school. Additionally, the governors said it would further limit their ability to speak to the press.

“You say that as elected officials we can’t make statements that could be damaging to the university,” Busuito said. “Who’s to make that judgement?”

Busuito, O’Brien and Thompson supported an amendment, drafted by Thompson, in place of bullet three, which reads: “I respect the opinions of others and support the diversity of opinions that may arise between members of the board. Any difference of opinion should be done so respectfully with the intention of protecting the university.”

This amendment failed 5-3. Governor Anil Kumar proposed an additional line to Thompson’s amendment, which read: “I will avoid any derogatory public comments and criticism of the university and the staff.” He became the tiebreaker, after his proposed amendment passed.

Subsequently, the governors approved the call for an amended code of conduct 5-3. The BOG will vote for the code of conduct officially at a later meeting. They did not provide a date for the decision. The board also delayed its vote on leadership positions, including chair and vice chair.