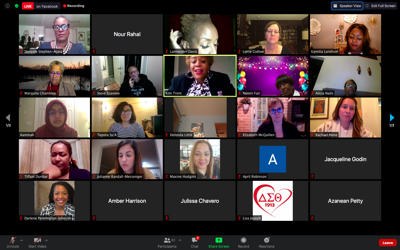 The Wayne State University President’s Commission on the Status of Women hosted a virtual forum via Zoom on Monday, Oct. 19 to discuss the impact of the 2020 election on women.

To have women targeted as their own voter category in elections is important since at one time “white men that have property were the only ones that could vote in this country,” she said. Campaign ads are now making sure women are spoken to and represented.

“Women —we have our own category of folks spending money, trying to target us, trying to make sure that they are getting in our minds, changing our opinions, reaching out to us to hear our vote,” Landrum said.

Women have a huge stake in this year’s election, in part because of the vice presidential nomination of Senator Kamala Harris, Landrum said.

Harris’ nomination makes leadership roles seem much more attainable for people of color, Landrum said. President Barack Obama’s leadership was different because he was still a Black man that was elected to the highest office. Now, the U.S. is seeing a Black woman, who has traditionally been in the background, take on more responsibility.

“Doesn't matter which party you're looking at. I think when you see that a woman —particularly a woman of color— has propelled to this level, you understand that women are breaking those ceilings,” she said.

Being Black, Indian, a child of immigrants and a female in politics comes with its own set of obstacles, said Kim Trent, deputy director for Prosperity, Department of Labor and Economic Development and former WSU Board of Governors member.

“I think as women of color, particularly, it has been made a lot more clear to us just how overwhelming misogyny is,” Trent said.

African American women are difference makers at polling locations, Gidloe said. They tend to have extremely high turnout due to organization and social networking through churches, sororities, community events and more.

“When you talk about the 2020 election, and you have candidates that either speak to women or degrade women, we're looking at that,” Landrum said. “We're able to then use our voices that not only reach out to our families, but our networks, because we're all over the place.”

The votes and voices of women are important to bring attention to different issues, although stances and importance of these issues vary, said Liette Gidloe, WSU associate professor of history.

Supreme Court nominee Amy Coney Barrett is a scholar of some note, but her views of the court’s role do not fit the present, Gidloe said, and the process by which she has gotten there compromises the legitimacy of the court.

“It is literally a matter of life and death,” she said. “Whether it's public health, or public safety, or education, or national security —all of these things are on the ballot as much as anything else this year. So, very small margins can make a very big difference in terms of policy outcomes down the line.”

To register to vote, vote early or update your voter registration for the Nov. 3 general election, go to your city or township clerk's office as soon as possible but no later than 8 p.m. on Election Day, according to the Michigan Voter Registration Center.