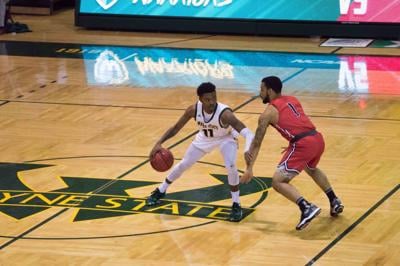 WSU’s offense, depleted by injuries recently, received a boost as senior guard Karim Murray, who entered the game averaging 16.9 points per game, returned to the starting lineup after missing the last four games with a leg injury.

The Cardinals wasted little time seizing momentum to start the contest as they scored the first five points of the game.

Baskets by Murray and forward James Gordon IV on consecutive possessions pulled WSU to 5-4, before SVSU used two three-pointers and a 7-0 run to take an early 12-4 lead.

After falling behind 17-8 seven minutes into the stanza, WSU found their rhythm on offense late in the first period as baskets by sophomore guard Antonio Marshall and senior guard Brailen Neely pulled the Warriors within 23-20.

Neely and Murray each made a basket to cut WSU’s deficit to 28-24 inside the final minute of the stanza before SVSU scored the final points of the half, capped off by a buzzer-beating three-pointer to take a 33-24 lead into the intermission.

SVSU started the second period in the same manner as they did the previous stanza, scoring on their first three possessions to take a 41-26 lead 90 seconds into the period.

The Cardinals effectively sealed the game during a three-minute stretch early in the second half. They held WSU to just four points and extended their lead to 45-30.

The big stat from the game was SVSU converting 11 three-pointers, while WSU missed all 10 of their attempts.

“Obviously, that was the difference. We just had no answer for those guys,” head coach David Greer said. “When they shoot 11-21 and we shoot 0-10, that’s not a recipe for winning.”

Neely finished with a team-high 21 points and seven assists. However, with the team’s shortened rotation, Greer said WSU will need more from their role players going forward.

“At this point, if Brailen doesn’t have the ball in his hand it’s like a potluck for what’s going to happen,” Greer said. “I thought they did a good job of denying him the ball and making him work.”

The loss dropped WSU’s record to 4-10 on the season and 1-9 in conference play.

For the team’s next game, Greer said the game plan for the team is pretty succinct.

“We have to manage the game (and) keep it a half-court game, just to make sure we don’t run out of gas,” Greer said.

WSU returns to the Matthaei to host Northwood University Jan. 25.

Irving Mejia-Hilario is a contributing writer for The South End. He can be reached at ismejia48@wayne.edu.