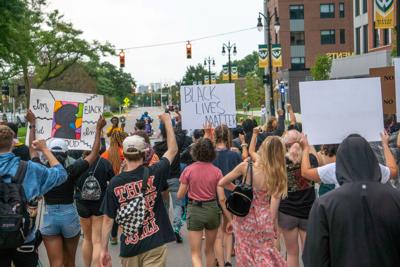 After deliberating for less than 10 hours, the jury found Chauvin guilty of second-degree unintentional murder, third-degree murder and second-degree manslaughter, according to the Star Tribune.

The killing of Floyd, a Black man, on May 25, 2020, sparked global protests against systemic racism and police brutality. This included Wayne State students, who joined local protests last May.

President M. Roy Wilson said the decision is a step in the right direction in an email to the campus community Tuesday, but there is more work to be done.

“Even a just verdict can’t erase what we all witnessed in that infamous and horrific video,” Wilson said. “The crime for which Mr. Chauvin is now to pay was an unspeakable act of murder and injustice, inflicted by a man who had sworn to uphold justice.”

“The WSU Student Senate applauds the decision as our country strives to combat injustice and provide equity and inclusion for all,” Chhabra said. “However, we also acknowledge that this is just the first step in dismantling a problem of systemic racism and the importance of coming together to build a better tomorrow.”

Chhabra said Senate created the Social Justice project group, which is working with the Office of Multicultural Student Engagement to develop dialogues about social justice-related topics.

Senate is also in the works of developing a campus-wide Black Council that will be ready to launch in the fall 2021 semester, Chhabra said. The initiative is led by the Senate Black Student Success project group.

Kendra Jackson, Black Student Union NAACP social action chair, said she was upset by the video that surfaced on social media of Floyd’s death, and hoped the jury would view it as proof Chauvin was guilty.

“We’re talking about in those 10, 20 minutes of his (Floyd’s) actual last minutes of life, that was just hard to see on camera,” Jackson said. “So, for the jury to actually look at the hard evidence and base (the verdict) off of that… that’s how it’s supposed to be.”

Kaitlyn Kipp, a newly elected at-large Senate member, said the trial of George Zimmerman in the death of Trayvon Martin was her first experience with social injustice.

“When (Zimmerman) wasn’t found guilty… it broke my heart,” Kipp said. “But seeing this was almost like a ‘finally’ moment.”

“The whole policing system as a whole is inherently flawed,” Kipp said. “And the carceral state as a whole is a problem. Until we get rid of that, I don’t think there will be real justice.”

Cover photo taken by Quinn Banks, The South End's multimedia editor, at a Sept. 1, 2020 campus protest against racial injustice. He can be reached at multimediaeditortse@gmail.com.