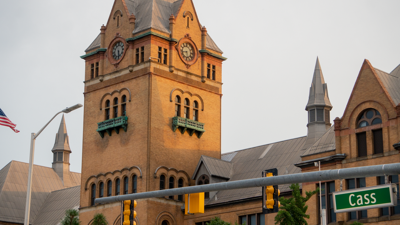 Editor's Note: This article has been updated to include an embed of the Wayne State Student Senate statement on Palestine. An earlier version included only a link to the statement.

The Senate Palestine Statement Committee, which was created during a May 20 Senate meeting, approved the statement by voice vote at a May 27 emergency meeting.

“It is our responsibility to stand against these acts of oppression and occupation regardless of whether or not we are directly affected by this violence,” the statement said. “Injustice anywhere in the world threatens our own freedom. We must stand in solidarity with those beaten, silenced, and killed.”

Senate also called for members of the campus community to push for passage of congressional legislation which would condition U.S. military aid to Israel, according to the statement.

According to his email, Wilson said he disagreed with certain language in the statement.

“While we support the right of our students to express views important to them, I regret their use of some needlessly inflammatory terminology,” Wilson said. “We must treat each other with civility and respect. Some of their words did not do that.”

“I’m very disappointed with the statement put out by Wilson,” Shkoukani said. “The statement put out by the Student Senate had no foul terminology. It hurts me knowing my university does not support nor care about my identity. Bringing awareness to the ethnic cleansing that is happening to Palestinians should not be controversial.”

Dean of Students David Strauss said he believed Wilson’s email signals that WSU must come together in line with its principles.

“I think it sends the message that first and foremost we are a community where we must foster and expect a campus community of civility and respect and be guided by the values of our institution’s existence,” Strauss said.

Shkoukani said she believed WSU should recognize the crisis’s effect on Palestinian members of the campus community.

“They (WSU) have a bunch of Palestinian students, some of which are in Palestine,” Shkoukani said. “I’m actually going to go in a few days, and we are directly impacted by what’s going on. We have family members there. This makes us feel as though somehow we’re a burden, and we’re not.”

“Since Wilson put out his statement, we’ve had an overwhelming amount of support from students and staff both in private messages and in public comments,” Bagdon said. “I’m sure his intentions were bad, but in a way I’m very grateful for what he did.”

Senate faced both support and opposition from the campus community after publishing its statement.

Shkoukani said she was in favor of the statement but thought Senate should have used additional platforms to publicize it.

“I feel like the statement they released was a good one,” Shkoukani said. “It brought things to light that we haven’t talked about before. I just wish they would have sent an email. If they had sent an email, it would have reached the student body and had been more official.”

Miriam Starkman, executive director of Hillel of Metro Detroit, said the statement reflected the views of the Palestinian political party Hamas and could create a dangerous environment for Jewish students at WSU.

“To put out a statement that supports the objectives of Hamas is antisemitic. It makes for an unsafe and uncomfortable experience on campus for students and faculty,” Starkman said.

Senate is opposed to antisemitism and other types of hate, according to the statement.

“We stand against all forms of anti-semitism and Islamaphobia. We condemn violence against Jewish, Muslim, Israeli, and Palestinian people in any form,” the statement said.

Senate Parliamentarian Yousra Zouani said in an email to The South End Thursday that she would like to think the statement conveys a common view among WSU students.

“I hope that the statement is a reflection of the broad sentiment of the majority of students at Wayne State. Many students have expressed the sentiment shown in the statement which is why the Senate felt a need to publish it,” Zouani said.

Starkman also said she objected to the usage of the Palestinian flag as the background of the statement.

“The statement has the Palestinian flag embedded in it, which is confrontational in of itself,” Starkman said. “It’s already choosing a side. The language is also very disturbing because there is no recognition of the legitimacy of a Jewish state. When you’re not even going to start that conversation, it becomes antisemitic.”

Bagdon said they disagreed with Starkman’s view on the statement.

“I stand behind the usage of the Palestinian flag,” Bagdon said. “Saying that children shouldn’t be bombed means that we support Hamas is an unfair equation. I think what Hamas does is bad and I think what Israel does is bad. I think you can believe all of those things at one time.”

Shkoukani said she believed conflating Israel’s actions with Jews is wrong and she stands against antisemitism.

Zouani said she hoped Senate could create more avenues for people to have deeper conversations about Palestine and Israel.

“Our focus in the statement is addressing the humanitarian crisis within Palestine,” Zouani said. “I strongly believe that everyone in the Student Senate is against antisemitism and their focus is to create a stronger and unified community on Wayne State. Moving forward, we hope that we are able to hold sessions for students to come together and resolve these issues in a more intimate setting.”

Senate President Sailor Mayes could not be reached for comment.