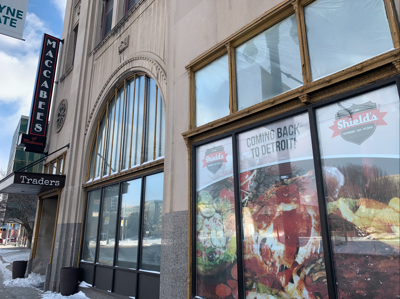 When Asian-fusion eatery Maccabees Traders permanently closed its doors in June, many anticipated what restaurant would open on the ground level of Wayne State’s Maccabees Building.

WSU’s tallest building will welcome Shield’s Pizza – which originally opened in 1937 on Detroit’s east side — in March.

The restaurant will offer express lunch, 12 beers on tap and its regionally famous deep-dish pizza — voted metro Detroit’s best pizza in 2018 by Local 4 WDIV. Shield’s has other locations in Southfield, Macomb and Troy.

“The environment that we want to create is a casual, fun hang out for college students and their peers,” said Norman Mourad, who will license the Shield’s Midtown location. “I think the fact that it’s going to be a good value will really give the (restaurant) the longevity it needs.”

Offering good quality food at an affordable is important to Mourad, he said.

“I think that’s what’s missing down here,” Mourad said. “There’s a lot of expensive restaurants around, and I think we are going to be a real fun, casual place to come hang out.”

Other than pizza and beer, Shield’s featured menu items will include sandwiches, salads and dinner entrees.

Sophomore computer science student Dawson Manuck said he plans on visiting Shield’s and he thinks it will be a successful business.

“Pizza is one of my favorite foods,” he said. “I think that pizzerias are missing from campus. There are some (pizza) places near campus but not as close as Shield’s.”

The pizzeria isn’t close enough for freshman political science student Alessandra Gill, who prefers to eat in the Student Center and said she “wouldn’t eat at (Shield’s) because it’s too far, especially in the winter.”

Mourad said he expects groups of customers to purchase pizza and drinks for around $10 a person. The express lunch option will offer a slice of Detroit-style deep dish pizza with a soda for around $5.

Mourad said the restaurant will also cater to on-the-go students by selling prepackaged food, such as salads.

The Shield’s Pizza brand is owned by brothers Paul and Peter Andoni. Peter was a friend of Mourad in college, and when the Andonis had the opportunity to open a new location, they asked him if he was interested in joining their team, Mourad said.

“Because of all the excitement downtown and being part of Wayne State, they said to me, ‘Hey Norm, I think this is a great opportunity,’ and it came together.”

Ken Narita is The South End's general assignment reporter. He can reached at ken.au.narita@gmail.com.