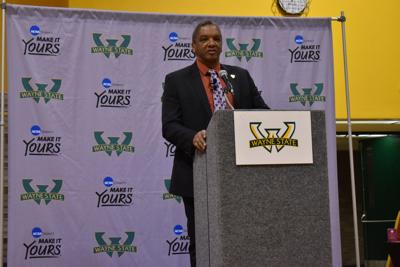 Wayne State football introduced its recruiting class of 2020 at the Football Futures Night at the Matthaei Physical Education Center on Feb. 13.

Head coach Paul Winters said the class has players that could eventually make an impact.

“I think this recruiting class has a number of guys who can become impact guys,” Winters said. “Myles Harris is a stand-out safety, one of the best I’ve ever seen (and linebackers) Donte Reed, Michael Smith, Devin Hibbett, all of them are outstanding guys.”

This year, WSU made an effort to fill spots on the defensive side of the ball, as linebackers and defensive backs accounted for 12 of the 24 players added.

Another focus for WSU during recruitment was the kicker position. The departure of freshman kicker Niccolo Seilò and uncertainty over when redshirt freshman Jackson Griskie would return from an injury was a factor in adding four players who are capable of switching between kicker and punter.

One of the new players the coaching staff raved about during the event was linebacker Shane Veith, a 6-foot linebacker from Dearborn High School, who drew comparisons to Los Angeles Chargers defensive end Joey Bosa.

“Myren was the county MVP, he’s extremely powerful (and) has the ability to make people miss,” Winters said.

“He’s about 213 pounds, so he might even be a little bigger and stronger than Joique was at the time.”

Harris, along with his brother Myles, were one of two sets of twins WSU added in this year’s class, joining cornerback David Green and Caleb Green, who plays multiple positions, including quarterback.

“The Gronk comparison is (that he’s) just a hard-nosed, fast-twitched, go-get-them type of guy,” Winters said.

“He’s not overly tall or long, but he’s explosively quick. Nathaniel is just as big as Gronk is at this age and when you watch the highlights, he does the same things that he did too.”

Winters said he was optimistic about the future of the football team. Last season WSU went 8-3 and finished in second place in the conference.

While he’s looking forward to eventually having the entire recruiting class on campus, Winters said they have a lot to learn before the season begins in September.

Irving Mejia-Hilario is a contributing writer for The South End. He can be reached at ismejia48@wayne.edu. Cover and teaser photos by Irving.