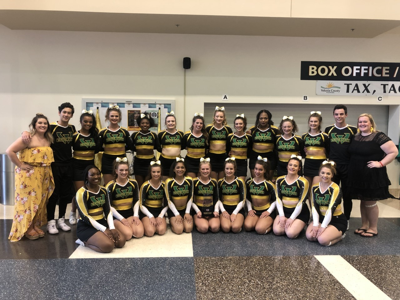 For Wayne State’s cheer and dance teams, sporting events are an outlet to showcase new routines while preparing for their annual trip to nationals each spring.

No games will be played in 2020 and competitions remain uncertain, but both teams are preparing to perform and compete again.

“We’ve been able to bond as a team, create our goals and get our material learned,” Fettes said. “While it has been different, I would say that (it) has still been good and we’re still moving forward.”

“It’s a lot harder than I thought it would be,” Peterson said. “I’ve gotten to meet everyone over FaceTime, so that’s nice but it’s not the same as getting to meet them in person and see their skill level in person for myself.”

Before the shutdown of athletic events due to the COVID-19 pandemic, both teams were closing in on appearances in the National Cheer Association and National Dance Association Championships in Daytona Beach, Florida.

Dance team member Anna Cloutier, a senior public relations major, said the team’s growth throughout the winter semester and performance at a competition in Ann Arbor boosted their confidence leading up to the competition.

“Based off our performance at the University of Michigan dance team competition, we were really excited,” Cloutier said. “We were really ready to start working hard and go the little bit farther we needed to be nationals ready.”

Fettes said she appreciates having had the opportunity to see her team perform before the COVID-19 pandemic hit.

“I’m certainly to this day grateful that we were able to perform, our friends and family were able to see them and the girls were all able to be on stage,” Fettes said. “A lot of teams didn’t get that experience.”

Cheer team member Katie Finamore, a senior kinesiology major, said the team’s success in 2019, where they finished second at the NCA Championships and earned one of six paid bids to the 2020 event at the NCA’s Summer Camp in Louisville, motivated the team to meet their goals.

“We were just working so hard (be)cause we wanted to achieve our dream of being national champions,” Finamore said. “We were just so excited to see where we could go because we improved so much from when we first started.”

Despite the growing possibility the event would be canceled, Finamore said receiving the news during spring break was still “hard to process.”

Peterson said she takes comfort in the fact that while her team waits for the resumption of athletic events, safety is being heavily prioritized.

“I know that cheerleading isn’t the safest anyway and going into COVID (concerns) and having all those liabilities I understand that stumbling and tumbling might be a little more difficult at this time,” Peterson said. “So while it is frustrating that we can’t practice, I know that it’s right now for the best and the safety of the team.”

With the cancelation of fall sports, including football, Peterson said not being able to hold games at Tom Adams Field will be tough.

“It’s very sad knowing we’re not going to be there even as staff, even if we would have done no fans or anything like that,” Peterson said. “Just not being there at all is kinda heartbreaking.”

Cloutier said the experience cheering on the sidelines during football games is hard to replicate.

“I think me and any spirit member knows (that) you feel like you’re projecting to the crowd,” Cloutier said. “You’re getting to represent your school, cheer on the football players behind you (and) you get to try to hype the crowd up when exciting things are happening.”

Fettes said seeing seniors close out their final season on the sidelines is something she will miss.

“It’s going to be really hard to not be a part of (that), but obviously it is the safest decision and we’re going to find other ways to celebrate those seniors throughout the year,” she said.

Peterson said the cheer team will begin virtual practices soon, but without the ability to do stunts, they will ease their way back into their routine.

“For now, it’s all going to be a lot of morale boosters and conditioning and getting ready for when we get the go-ahead to hit the ground running,” Peterson said.

As for the dance team, Fettes said they are staying focused on their goals for the season.

Matt Williams is a contributing writer for The South End. He can be reached at fq7799@wayne.edu.