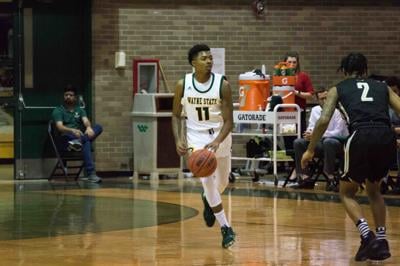 The turning point of the game occurred late in the second quarter as WSU overcame cold shooting to start the quarter, trailing 30-28 late in the stanza.

WSU found its rhythm using a 6-1 spurt, punctuated by four points from sophomore forward Kate Sherwood to take a 34-31 lead. A basket by the Rangers, as the half ended, cut WSU’s lead to 34-33 at the intermission.

In the third quarter, WSU pushed its lead to 53-45 and senior guard Sadia Johnson scored the team’s final five points of the stanza, sending the Warriors into the final quarter with a 56-49 lead.

WSU’s advantage never dipped below 11 in the final four minutes as they outscored Parkside 10-2 to clinch the victory.

Head coach Carrie Lohr credited the team’s bench for getting the team through its struggles in the second quarter.

“Some people who hadn’t been in the game at all were coming in late in the second quarter and now you’re coming in where it’s a tight game,” Lohr said. “I thought our players even though we made some mistakes really kept their composure.”

Johnson, who scored a team-high 21 points, said hitting a couple of shots early helped forge her path for the game.

“I think (in) some of my best games, if I start off the first quarter getting a couple of good shots, or starting off with a good pass, that definitely gets me going,” Johnson said.

“My teammates were definitely setting me up and the bench is always cheering after I hit a three, so that definitely builds up my confidence.”

With the team close to clinching a berth in the Great Lakes Intercollegiate Athletic Conference Tournament, Lohr said she hopes the seniors will lead the team with its next road trip.

Earlier in the afternoon, WSU men’s basketball defeated Wisconsin Parkside 64-51 at the Matthaei.

WSU’s offense got off to a fast start, scoring on five of their first six possessions, highlighted by baskets from graduate forward James Gordon IV and sophomore guard Antonio Marshall to take an early 14-8 lead.

While the defenses held the offense in check for portions of the stanza, WSU scored enough points to take a 31-20 lead late in the half.

Despite being outscored 8-4 to end the period, WSU took a 35-28 lead to the intermission.

After WSU pushed their lead to 41-31 three minutes into the quarter, the Rangers scored the next 10 points to tie the game.

Following a layup by freshman center Nate Talbot, senior guard Brailen Neely scored eight of the Warriors next 10 points to put WSU in front 53-44 with nine minutes left in the game.

WSU put the game away late in the period as baskets by Marshall and freshman guard Kylin Grant gave the Warriors a 15-point lead that they maintained to end the game.

“Coming out of the timeout, Brailen made a couple of nice plays and got us back to maybe seven or eight up, Parkside missed a couple of shots and we turned those into baskets,” Greer said.

Neely, who scored 14 of his game-high 21 points in the second half, said getting other players involved early helped pace his performance.

“I know I play a lot of minutes, so I try to pace myself,” Neely said. “I try to see what guys can catch a rhythm, so I facilitate and try to get the ball moving in the first half, and second half, come out and be a little more aggressive and try to take over.”

For the team’s next game against Northwood University, Neely said he hopes the team is ready to play.

“Those guys beat us in our home gym, so hopefully everybody (is) just on the same page to go to their home gym and do the same to them,” Neely said.

WSU improved its overall record to 6-15 and 3-14 in league play with the win.

Both teams play their final home game of the season versus Ashland University at the Matthaei Feb. 27.