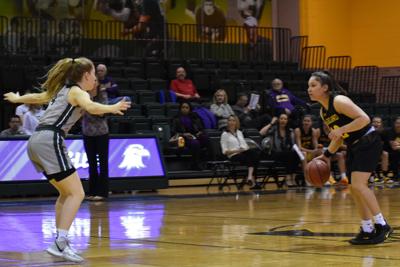 Following a delay to the 2020-2021 season due to the COVID-19 pandemic, the Wayne State University women’s basketball team will look to make the Great Lakes Intercollegiate Athletic Conference Tournament when their winter season begins in January 2021.

In the 2019-2020 season, WSU went 15-13 and qualified for the GLIAC Tournament for the third consecutive season. In the opening round, WSU upset the third-seeded Ferris State University Bulldogs for their first berth in the semifinals since 2014, before being eliminated by Grand Valley State University.

As sports schedules were adjusted due to the pandemic, with the GLIAC canceling the 2020 fall schedule and delaying the upcoming winter season, senior guard Anna Ruhstorfer said she wasn’t sure the team would get to play.

“There was a time during all of this where I thought the season might not happen, but the whole time all of us stayed positive and we’re still hoping we’ll have a season,” Ruhstorfer said.

The unpredictability of the pandemic is unsettling, but Ruhstorfer is pushing forward, she said.

“I mean it is hard because you don’t know what’s gonna happen next with everything, so even now it’s hard to figure out whether we will (play) or not, but we’re all staying positive and honestly we hope we do,” Ruhstorfer said.

Head coach Carrie Lohr, entering her 10th season in the position, said the team is trying to make the most of the current circumstances.

“Being in the situation we’re in right now certainly has been life changing for all of us, but I also think as student athletes there is a mentality of perseverance,” Lohr said.

The team is preparing for their upcoming season in a safe manner, Lohr said.

“We’re gonna abide by the rules and work within what is safe and what’s best for everyone. Yet we’re also going to take each day and (examine) how can we get better, whether it’s on an individual basis or from a socially distanced basis,” Lohr said.

While the team is still finding its footing during practice, Lohr said a couple of new players that could help the team immediately are freshman guard Chenelle King and freshman forward Riley Davis.

“I think Chenelle King from Carman-Ainsworth (High School) certainly adds a point guard mentality, she’s definitely a pass-first (guard) but has the ability to score,” Lohr said. “(I) think Riley Davis is unique in we haven’t had a perimeter player at 6’1 who can really shoot it, so I think she brings something unique to our team.”

Next season, games will be held on back-to-back days with a minimum of 20 hours between contests. Excluding the Jan. 30 and Jan. 31 matchups with GVSU, WSU’s home schedule will consist of games on Friday and Saturday.

Due to COVID-19 guidelines, fans can’t attend games at the Matthaei Center. Sophomore guard Rebecca Fugate said adjusting to an environment without spectators will be a big change.

“Here we have such a great atmosphere, we have the band, a bunch of fans, we have a very energetic (environment) when we play, so that’s gonna be a major adjustment,” Fugate said. “But I think our bench is probably one of the most energetic and loudest benches, so that’s really gonna help.”

Lohr said it’s been reassuring to know the depth of the plans by the GLIAC COVID-19 Task Force to help enable the start of the winter season.

“It’s a good feeling knowing that there’s lots of layers and lots of people out there trying to help make the student-athletes experience a positive one in spite of the difficulties that we’re going through right now,” Lohr said.

WSU is moving forward with the understanding that plans may change, Lohr said.

“We’re all very aware that what we plan today can be different tomorrow, and we’re ready to roll with whatever opportunities that are presented to us,” Lohr said.

Cover photo by Irving Mejia-Hilario, sports editor for The South End. He can be reached at ismejia48@wayne.edu.