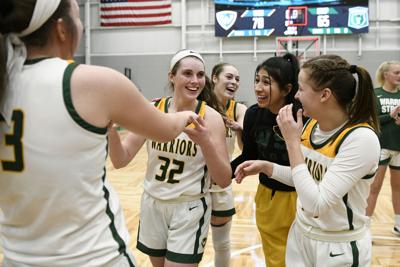 Wayne State women’s basketball defeated the University of Wisconsin-Parkside 70-65 in the opening round of the GLIAC Tournament on Wednesday at the WSU Fieldhouse.

Head Coach Carrie Lohr said the Warriors made necessary halftime changes to help guide them to a close victory.

“You get into the postseason and everyone’s record is 0-0 and everyone is playing to advance,” Lohr said. “I think that our team was able to make some adjustments at halftime and we were able to have a really strong third quarter offensively and defensively.”

In the third quarter, the Warriors outscored the Rangers 20-13, which gave WSU a 47-40 lead going into the fourth quarter.

Senior forward Grace George led the Warriors in scoring with 26 points. She also led WSU through the third quarter with an 8-0 run, helping WSU get to a 12 point lead with 3:42 left in the quarter.

“Rebecca showed last night what she is capable of and she’s shown signs of that throughout her career,” Lohr said. “However she’s been in a little bit of a slump and it’s one of those things where you know you trust her, she’s put in the work, she’s put in the time and it’s going to come, you just don’t know when. And her timing was perfect.”

Fugate scored 15 points, shooting 50% from the three-point line and hitting 60% of her total shots. In addition to Fugate’s effective scoring, she also contributed six assists, a team-best, in the second half.

Lohr said the Rangers drained decisive three-point shots despite the Warriors’ tight defense, which made the game tighter in the final quarter.

With 50 seconds left in the fourth quarter, UW-P hit a three-pointer to bring the score to 64-62. However, George answered back and got a critical layup, which put WSU up by four points.

UW-P made another important three-point shot, making it a one-point game at 66-65. Both teams proceeded to call a timeout.

Sherwood sank both free throws, pushing WSU to a 68-65 lead. She also stole the ball on UW-P’s ensuing position, forcing the Rangers to foul her with one second left.

Sherwood also made the next two free throws and propelled WSU to the victory. The win pushes the Warriors forward to the semifinals for the first time since the 2019-20 season.

Lohr said this season’s team is looking to leave its mark in WSU’s record books.

“Our seniors definitely have their locker room talks and they’ve had a great four years together here and they are really looking to leave their legacy so to speak,” Lohr said. “And I think they want to be the team to take us further than any other team has done in the past.”

Looking ahead, WSU will face Ferris State University for the third time this season on Saturday at the GVSU Fieldhouse Arena. The Warriors are 1-1 against the Bulldogs this season.

Lohr said the Warriors will focus on FSU redshirt senior guard Adrienne Anderson to limit her success as much as possible.

“First and foremost I think it is going to be important to minimize Adrienne Anderson, their fifth-year senior, who at one point was a player of the year nominee prior to an injury,” Lohr said. “She’s been in the league for five years and is a very experienced player. I think she is someone that we really need to limit.”

The setting should make for an interesting matchup, Lohr said.

“We won at Ferris, Ferris won at Wayne State,” Lohr said. “Now we’re going to a neutral site so I expect it to be an exciting game.”