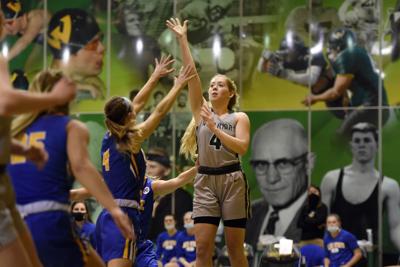 The Wayne State University women's basketball team split their series at Davenport University. WSU obliterated DU 91-57 in their opening matchup on Jan. 15. However, the Jan. 16 matchup yielded different results, as WSU took their first loss of the season 60-58 at the DU Student Center.

Despite an impressive showing on Friday, it was clear the number of games WSU had played in succession had begun to pile up. Over six days, they played four games. Head Coach Carrie Lohr said they knew the task ahead of them this week would be difficult.

"We've had a tough challenge ahead of us. We knew it was going to be tough going in, but I give our team a lot of credit. Our loss was certainly not due to a lack of effort," Lohr said.

Due to the fatigue many players felt, Lohr said she and her staff felt it necessary to make changes to the rotation. For example, junior forward Grace George had to play 40 minutes in Saturday's game. On average, George has only seen 24 minutes per game throughout her career.

Lohr said the combination of a large workload and an inability to kickstart their offense cost them a victory on Saturday.

"We were rotating early, based on just having played our fourth game in six days. But then when we got ourselves behind we were just trying to find a group to build some chemistry. It felt like today we were unable to find a good chemistry or flow. Part of that was Davenport's good defense, the other part of that was certainly on us," Lohr said.

WSU played from behind nearly all of the second half on Saturday, and it led to a finish that came down to the final minute. WSU still had an opportunity to tie the game again with 44 seconds left. Sophomore guard Kate McArthur missed a three-point shot from the corner.

Lohr said WSU’s playcalling was justified because it was a play that wouldn't commit to one specific shot.

"It was one of those 'We're gonna take the next best shot' kind of moments. Sometimes when you try to choreograph too much, people get tight, and they over dribble or miss something. Coming out of the timeout, we just said, 'We're going to get a good team shot,' Lohr said.

To WSU’s credit, some individual performances were exceptional.

Sophomore guard Rebecca Fugate posted a career-high in points scored in a game, with 24 points off 8-13 shooting on Friday. In addition, she also had four assists and played a perfect game with no turnovers. However, on Saturday she lost her rhythm, scoring only 12 points, with no assists and three turnovers.

WSU again found themselves with a more dominant inside game. In both games, they outscored DU in the paint. Despite their struggles in recent years to be effective inside, WSU has yet to be outscored in the paint this year.

Lohr said she believed the contributions of junior forwards Sam Cherney and George would give WSU a better chance to compete inside.

"We just hadn't had a lot of success in years past. Getting the ball there wasn't the problem, we just weren't strong at finishing. With Grace and Sam, now as juniors, they understand that there is going to be more contact and they're going to play through it," Lohr said.

Rebounding was an issue for the majority of the weekend. Even though both DU and WSU tied in total rebounds during their first contest, WSU allowed 17 offensive rebounds on Friday and 18 on Saturday.

Lohr said she attributed the offensive rebounding problems to a lack of focus.

"We just weren't being disciplined to box out our position and go after the ball. It's certainly something that we have to continue to work on. It needs to become a better habit, we weren't doing the little things and they were able to out-rebound us today," Lohr said.

Looking forward, Lohr said many factors set them back over the weekend and need to be fixed.

"We need to clean up some things. We have to become better defenders, box out, and knockdown free throws. But that's all a matter of repetition," Lohr said.

WSU women's basketball returns to the Matthaei Center for a pair of matches against Northwood University on Jan. 22 and Jan. 23.