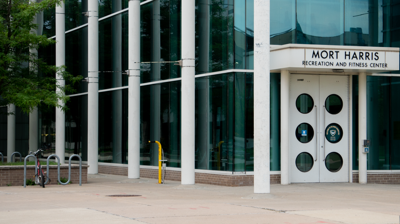 Over 150 people have signed a petition calling for gender inclusive policies and safe work out areas at the Mort Harris Recreation and Fitness Center, a removal of security cameras from the women’s only workout area and a “zero tolerance policy for inappropriate behavior” that protects Wayne State University students and staff, according to the petition.

Zoriana Martinez, freshman philosophy major, created the petition after she received a dress code violation and was asked to leave the MHRFC on Sept. 10, she said. After realizing through a "Class of 2024" group chat that she was alone, she decided to take action.

MHRFC’s dress code restricts patrons from wearing clothes that show bare midriffs, with pants and shirts worn at the waistline. Shirts and tank tops must be worn at all times.

“Any clothing that is perceived as offensive to patrons will be asked to be substituted for something more appropriate,” according to its policies and procedures. “The MHRFC staff has the right to deny access to or ask patrons not adhering to the dress code to leave.”

While setting up for yoga, wearing a sports bra and leggings, an employee approached Martinez and asked her to put on a shirt, she said. Having removed her sweatshirt and shoes, Martinez did not have a proper shirt to exercise in.

The employee suggested Martinez work out in the women’s only area, to which she refused, she said. Martinez was then asked to leave.

"I looked at her like she was crazy because I haven't heard ‘dress code’ in so long. You know, it's just such an outdated policy and Wayne State is so progressive, like we're the most diverse campus in Michigan," Martinez said.

Robert Latva, associate athletic director for the MHRFC, read the petition and understands Martinez's position, he said. But dress code policies are needed to ensure a safe environment at the center during the COVID-19 pandemic.

"I understand people's frustration; however, we are doing our best to keep people as safe as possible from viruses and infections that can live on surfaces. Part of that is keeping skin to machine contact limited as much as possible," Latva said.

As she picked up her things and was on her way out, Martinez noticed an employee who looked like she was in charge, she said. Their response prompted Martinez to make the petition.

"I was kind of met with, 'Oh, well, we have groups that come to the gym and we don't know how to keep them out. So that's why we have women wear a dress code. We've had some creeps who come into the gym before, it's hard to keep them away because they just keep coming back,’" Martinez said.

This is not a valid statement, Latva said, because the center has banned patrons due to behavioral issues.

“People who have acted in a way that warrants a permanent ban from the MHRFC have received one, whether those actions involved or were directed at our guests or staff,” he said. “Safety of everyone in our facility is number one for us.”

Ayanna English, an engineering major at WSU, is also a part of the ‘Class of 2024’ group chat and signed the petition. Efforts need to be made to shift the dialogue to treat people with more courtesy, she said.

“If we would teach people to treat each other with respect, we wouldn’t need a dress code. Right now, this is just enabling,” English said.

The petition also called for a change to security cameras in the fitness center, which Martinez said the MHRFC should be more transparent about.

There are 54 cameras throughout the facility, all visible to patrons, Latva said. A couple are even at eye level in the facility.

"I'm not saying you should remove every single camera,” Martinez said. “But to my knowledge, no woman has signed any disclosure forms about having a camera being pointed at the women's only section when she's exercising, likely with clothes on that are maybe not covering everything that she would usually cover in public.”

Having cameras in the women’s only area is contradictory to the premise of having a private space for women in the center, Martinez said.

“With the cameras, that defeats the entire purpose of it being a safe section. This is something that does not need to be on videotape,” she said.

Latva realizes that cameras in the women’s only area may make some people uncomfortable, he said. Cameras are only used when needed to review reports of theft, misconduct and maintenance issues in the facility.

The cameras are an important security measure for the center, English said.

“The cameras should be there because anything can happen, and they want proof. God forbid someone gets sexually assaulted, if you have cameras, you have proof that it happened and you can see their face,” she said.

The issue of the cameras and privacy is about defeating outdated policies, creating a safe, welcoming environment for all in fitness spaces, Martinez said.

“People can walk in and out and if a guy walks through there's no one really monitoring that. So, I never felt really safe enough to take it off in the first place,” she said.

Removing cameras could potentially be counterintuitive to the safety of women, Krayem said.

“I don't know if I like the idea of removing the cameras all together because, like, what if something happened back there and they do need security footage, like it's kind of making it a blind spot and that's not safe for women either,” Krayem said.

The petition also calls for more gender inclusivity. The way gender non-conforming students are being treated is unacceptable, Martinez said.

"We have a women's only section, which implies that we should also be having a gender fluid and a gender non-conforming section as well because we have to also recognize that there are more than two genders in today's society," she said.

There are some facilities for gender non-conforming students already in place, Latva said.

"We have a unisex locker room right next to our women's and men's locker rooms. This includes full restroom facilities and a shower. This area also includes a changing table for anyone with children who happen to be visiting the MHRFC. This is for anyone and everyone," Latva said.

Morgan, a health and fitness advocate for Transcend the Binary, would like to see gyms across the country enact more progressive policies regarding gender, he said in an email. For safety concerns, Morgan asked to only be identified by his first name.

“Gyms are an intimidating environment for newcomers as is. When you add in anxieties surrounding gender identity, gender expression and that these individuals are statistically subject to harassment far more frequently than (cisgender) individuals, that anxiety significantly increases,” he said.

It falls on everyone in the community to support and create change, Morgan said.

“It's important to note that although policy supporting marginalized groups should uplift the voices of those groups, it is not their responsibility to create change,” he said. “Change happens with all of us and it cultivates through listening to and respecting the experiences of others while respecting their boundaries and willingness to share.”