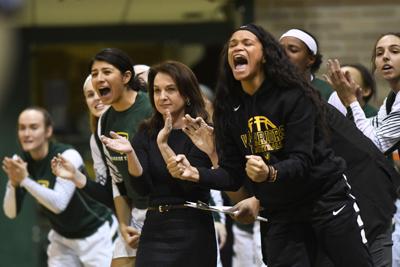 Wayne State’s women’s basketball team will look for a successful start to the season when they play their first game on Nov. 8.

Last season, WSU dropped its final three games of the regular season, advancing to the Great Lakes Intercollegiate Athletic Conference tournament as the eighth seed, before being eliminated by Grand Valley State University. WSU ended the season with a 13-16 record and an 8-12 conference record.

The Warriors were picked to finish fourth in the GLIAC South in the conference’s Preseason Coaches Poll, with senior guard Nastassja Chambers being named to the All-GLIAC South Division Preseason Team.

Head coach Carrie Lohr said she has been impressed with how the team has approached its pre-season workouts, comparing the early vibe of the team to the 2013 squad that advanced to the Division II NCAA Tournament.

“The mood has been remarkable. I have not had a team with this much energy and commitment since probably 2013,” Lohr said.

WSU enters the season with a mix of experience and youth as the team returns ten players and added four freshmen and two transfer players.

Lohr said the newcomers have worked hard to adjust to the team’s dynamic and projects two of the freshmen to see some early playing time.

“I anticipate that Rebecca Fugate is going to get minutes at both the point guard position and the shooting guard position, and I think Mercedes (Wagner) is really eager to learn every day, she’s very strong and a great rebounder,” Lohr said.

Chambers said regardless of the new faces, the team has maintained a positive vibe heading into the season.

“Since I’ve been here I think this is the closest team I’ve been on (from) a personal level, and I (credit) the (Matus) twins and Sadia (Johnson) for that,” Chambers said.

Along with Chambers, the team returns its other top returning scorer in senior guard Alex Matus, who made 51 three-pointers last season, along with sophomore guard Alexis Miller and sophomore forward Grace George, who combined to start 35 games last season.

WSU will open the season by participating in the GLIAC-G-MAC Challenge versus Walsh University before facing Lake Erie College on Nov. 9.

Despite both teams winning their last meeting against WSU-Walsh in 2017 and Lake Erie last season, Chambers said she feels great about where the team is at heading into the first two games.

WSU will play its first home game of the season Nov. 13 versus Central State University.