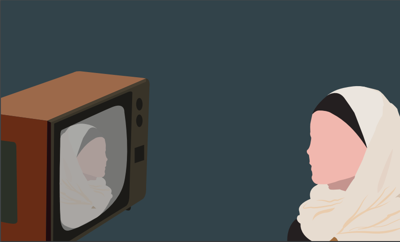 Karim Kharbouch — more commonly known as French Montana — recently released an eye-catching album trailer for his new album 'Montana.' In the video, a group of presumably Muslim actresses sit silently behind the rapper, wearing niqabs, with their legs crossed in red thigh-high boots.

The trailer claims to pay homage to the Moroccan rapper's Muslim roots. The day before it went viral, he explained the vision behind his latest project by tweeting, "You don't have to change who you are. You can bring people into your own world." Most likely, French Montana is alluding to the juxtaposition between his Moroccan roots and his induction into the American rap world. Similarly, he shows a Muslim woman can party, follow what Islam teaches, and veil all at once, ultimately freeing her from oppression.

But this is not the case for most Muslim women who chose to veil on their terms. They can still "have fun" without the use of drugs, alcohol, or premarital sex. If he intended to "pay homage" to his Muslim roots, he certainly didn't deliver. On the contrary, he presentation comes off as uneducated about what veiling entails in Islam.

This controversy stirred up a majority negative response from Muslim women, such as myself, who themselves struggle with wearing veils in the West.

Certain countries such as Denmark, France, and Belgium have banned the niqab, and those who choose to wear it have been subjected to paying fines, indescribable shame, harassment, and even death threats. Yet, when it becomes fetishized by a well-known figure in today's pop culture, non-Muslims are all of a sudden okay with it?

The message of this video promotes the conformity of Muslim women to Western culture, one that is more “liberating” than that of the Middle East. But let me tell you: Middle Eastern dictatorships are similar, if not worse in that regard. In addition to our socio-political climate, they have done a wonderful job confusing Arab culture, one that will compromise their Islamic faith for the attention of the West, with Islam. So why should we attempt to fit into a culture that contradicts what our faith preaches?

These women put their lives at risk for their religious beliefs, and French Montana is only serving himself by making money off of their bodies instead of honoring the sacrifices they make. In the West, Islam is often associated with the Sept. 11, 2001 attacks as it is, and women have been left to suffer the consequences.

This album trailer unnecessarily adds to their struggle by encouraging non-Muslim men to continue to discriminate by sexualizing Muslim woman instead of understanding their religion.

As a Moroccan who emigrated to the United States from a Muslim country, I believe this is Islamophobic, and he could’ve been done better.

Through the album rapper tried to tell the world that Muslims are not the terrorists they are innocent enough to be loved. This album is supposed to be creating unity in the different communities in the USA. This is the main page of writing services to help you in your essays. I really appreciate the work of this massive rapper for the sake of peace in the USA.