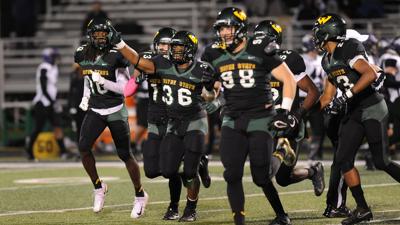 WSU scored the first points of the game on their second possession as junior quarterback Jake AmRhein threw a 47-yard touchdown pass to graduate running back Deiontae Nicholas.

WSU found the end zone again early in the second period as AmRhein threw his second touchdown of the game; a 40-yard pass to senior wide receiver Darece Roberson Jr to extend WSU’s advantage to 21-7.

WSU extended its lead early in the third quarter as senior linebacker Leon Eggleston intercepted his second pass of the game and returned it 35 yards for a touchdown to put WSU ahead 28-7.

Eggleston credited senior cornerback Greg McDade for setting him up to make the play. “Greg was playing great defense on the receiver (and) I just happened to be in the right place at the right time,” Eggleston said.

Hill’s second rushing touchdown of the game halfway through the stanza extended WSU’s advantage to 35-7. AU added a late touchdown to cut WSU’s lead to 35-14 heading into the final period.

Ashland found the end zone twice in the final quarter to pull to within seven and a touchdown pass tied the game with 24 seconds left in regulation.

On their first possession of overtime, WSU had a 41-yard field goal blocked, meaning AU’s next points would win them the game. However, a missed Ashland field goal sent the game into another extra period.

The Eagles opened the second overtime with a six-yard touchdown run to take their first lead of the game, but WSU blocked the extra point to keep their deficit at 41-35.

“When we blocked the extra point (the feeling was) ‘Ok let’s get this touchdown and make this extra point and get off this field’ and that’s what we did,” Winters said.

On the first play after the blocked extra point, AmRhein found Roberson for the game tying touchdown, and made an extra point by freshman kicker Niccolo Seilo won the game.

After the game Roberson said having another chance to run the play where he dropped a touchdown earlier in the game helped him make the crucial catch.

“Coach Winters came to me and told me he was coming back to it, so get ready,” Roberson said. “So I just listened to my coach and visualized myself doing that and I just went up and did my job.”

AmRhein threw three touchdowns with one interception, with Nicholas rushing for 178 yards. With the team’s depth on offense, Nicholas said it’s exciting to have an opportunity to make plays.

“The energy (that) I get when I get to make plays for this team is great because I feel like we feed off each other,” Nicholas said.

WSU improved its record to 4-3 (3-1 GLIAC) on the season and the overtime win was the team’s first extra-time triumph at home since 1998.

WSU will return home for its final home game versus Michigan Tech Nov. 9.