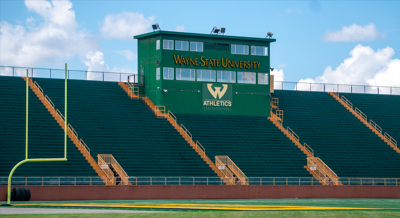 As the COVID-19 pandemic spread across the U.S. in March, the normal life so many were accustomed to was put to a halt.

Adjusting to the "new normal" harmed many people’s mental health.

Wayne State student-athletes were impacted by the pandemic in a unique way, having to adapt to learning and training remotely and to new restrictions for athletics.

Recently, all WSU sports returned to practice with new COVID-19 restrictions, including random screenings and constant sanitization of equipment. The Great Lakes Intercollegiate Athletic Conferences’ suspension on competition will be lifted on Jan. 1, 2021 and winter sports are eyeing a return in February.

In March, junior nursing major at WSU and outside hitter/middle blocker for the WSU women's volleyball team, Taylor Wagner, was in a microbiology class when she heard the NCAA canceled sports until further notice, she said.

"It was scary. I didn't know what to think. I'm a medical professional, so for me, I know that this is a virus that could be really bad, but how is it shutting down our whole country? I've never seen that before. We don't know. I couldn't logically wrap my head around it," she said.

Meanwhile, in Lakeland, Florida, the WSU baseball team was training at the Detroit Tigers' practice facility. While there, it was announced over the PA system that the MLB season was canceled. Nate Roede, a junior utility player, found himself in a state of uncertainty, he said.

"We had no idea like what to do after that because, we're like, 'Okay if they're getting canceled, we're getting canceled.' As we walked to the bus, we were getting ESPN notifications that the NCAA was shutting down sports and all this stuff and it's just like, 'What do I do now?'" he said.

Wagner, president of the Student-Athlete Advisory Committee, immediately made calls to the administration, she said.

"It was like every week, nobody knew what was going on. Nobody knew what the next week would even look like. Even the people that should know have no clue themselves. So, I just didn't get my hopes up for having a season," she said.

In May, the NCAA conducted a study which indicated many student-athletes were having increased mental health concerns. One in 10 respondents said depression makes it hard to function “most every day.”

"I definitely experienced a ton of mental problems because I'm a very extroverted person. But we push away the emotion because we don't need to feel that," Roede said.

Wagner wasn’t prepared to cope with the human impact of the pandemic, she said.

"As high-performance athletes, we are used to not fully feeling the emotional side of anything because we're just on to the next thing. Because it serves us well when we lose a game, we don't always emotionally connect with that and feel those emotions. I probably haven't allowed myself to really feel sad about it still," Wagner said.

As COVID-19 guidelines were implemented, teams shifted to remote formats. Instead of practicing with teammates, student-athletes would be by themselves, isolated from the people that gave them motivation.

"It's how they learn to form connections and interact with others and I definitely think it can affect how they see themselves and how they continue to build connections,” Fails said. “It can impact their well-being tremendously, in some cases there's also the loss of physical activities. For many people, physical activity is a means of coping.”

Wagner struggled with motivation while practicing alone, she said.

"Sport is a place of community for us. So, you realize that it's not just me going to practice, it's the interaction with other people, and that you grow together,” she said. “When you don't have somebody there, you're only battling your mind. It becomes an internal battle of how am I going to push myself to be better? Because I don't know what anybody else is doing.”

Roede was not prepared for losing his sense of community, he said.

"It's (practice) a sense of them being around you and the camaraderie you have with your teammates. The environment and the atmosphere completely changes your mindset and how you go about working out. It's completely different and I actually hate it," he said.

"I was seeing myself stay up really late and waking up at like 11 to noon instead of seven or eight. Then I'd feel like crap about myself because I'm like, 'You're wasting a day, you're not doing anything productive. What are you doing with yourself?' But there's nothing to do, anyway. But then it turns into doing that every single day," Roede said.

Learning how to navigate life in quarantine was challenging for Wagner, she said.

"It became a vicious cycle. At first, I was like okay I can just relax and enjoy life, enjoy being around my family. Then school hit again, and I wasn't working out. And then my sleep schedule just slipped. It was like, 'How do I regulate my life and stay on top of things?'" she said.

"This could cause some self-doubt that could also play into like eating patterns and like sleeping patterns and definitely like more negative self-talk, which can lead to anxiety and depression in some cases," Fails said.

The NCAA study also found 60% of men and 55% of women knew how to either contact or access mental health support. Steps must be taken to increase awareness of resources, Fails said.

“We need to get those numbers up. I would like it to be 100% of athletes or 100% of people in general who know how to access mental health care and health care in general,” she said.

Changes should be made to increase access to mental health services, Roede said.

"In my opinion, 60% is a failing grade. Even if you are mentally stable and you're a positive person, and that could also change very quickly with one event happening in your life. So, I think that number needs to be higher. I think there's a lot of ways to go about it. And the NCAA has a huge platform to make that happen," Roede said

Wagner and Roede have kept their heads up as the months have gone on. Today, both say they are in better positions.

Despite not finding much enjoyment in her coach’s virtual workouts, Wagner’s mental health improved, she said. She was playing beach volleyball during the same time period the team was doing virtual workouts.

“I would be by the water and in nature. And that's where I would feel most at peace a lot. Like I could just focus on what I was doing there, a lot like playing volleyball in the gym," she said.

Today, Roede only leaves his apartment to practice for two hours, he said. Beyond that, his classes are online, and he does not feel the need to leave often.

"My life is completely different now that I'm back at school. I work part-time too. So, I'm up at seven o'clock every day. My days are jam-packed. There's something that I wake up to, to look forward to every day. There's somewhere that I have to be, and I guess that's a plus. I'll take that," he said.

Virtual simulations replaced in-person labs and Wagner spends hours sitting at her desk each day, she said. Seeking support for her mental health had a positive impact, Wagner said.

"When everything ended, I was like, 'Wow, what am I missing?' Then it was like 'Okay, I need to go back to therapy.' It was really a big staple in my life, so when I started going back it was like night and day. Having that time of introspection is really helpful. Having someone check in with me because you need to always check in with yourself," she said.