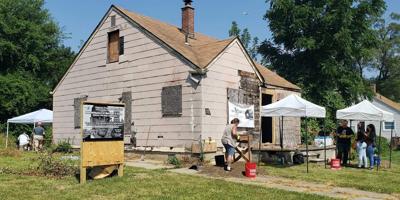 On July 20, a team from Wayne State’s Department of Anthropology began a three-day excavation at the former home of American Civil Rights Leader, Malcolm X.

The home is owned by an Inkster-based non-profit organization called Project We Hope Dream and Believe and is located at 4336 Williams St. in Inkster, MI.

In 2021, the home was recognized by the National Register of Historical Places after being on the demolition list for nearly two decades.

Aaron Sims, co-founder and executive director of Project We Hope Dream and Believe, campaigned for 13 years to secure the house for restoration and preservation of the space.

The excavations took place from July 20-23 from 10am to 3pm and were led by WSU Department of Anthropology professor and Project Manager at Project We Hope Dream and Believe Tareq Ramadan, WSU professor and archaeologist Krysta Ryzewski, and Sims.

Their primary goal with the excavation, Ramadan said, is to learn more about who Malcom X was.

Ramadan emphasized how the excavations were just one step of a multitiered plan to preserve and rehabilitate the home and later transform it into a museum.

“We’re hoping to document the social life of the house and document all those chronological layers to the home with the hope of providing some insight into the time in which Malcolm or the Little family itself resided here and take those materials and display them either at Wayne State or in the museum of the home when it’s constructed and completed,” Ramadan said.

WSU students also heavily contributed to the success of the project through volunteering at the site.

WSU senior undergraduate student who is majoring in Anthropology, Brianna Leblanc, said she was filled with excitement regarding the project.

“I’ve always been interested in Civil Rights Movements and things like that but learning about Malcolm X is one thing and then coming here and actually being a part of the history and digging through the soil is really interesting,” Leblanc said.

She also said the site was important in a historical sense.

Jenna Huntley, who just recently graduated from WSU with her Masters in Anthropology, said she hoped to discover anything tied to the 50s and 60s during the excavation.

“I’m hoping to find pretty much anything, but hopefully anything we can tie conclusively to the 50s when Malcolm lived here — he lived here from 1952 to 1953,” Huntley said. “So ideally, they kind of want specifics during that time, but I think anything we can find from the 50s to 60s when Malcolm’s family occupied the house would be pretty solid just for the history of Inkster itself too.”

Currently, Sims said he is awaiting approval from the Michigan Historic Preservation Office before they can begin construction. They are hoping for approval sometime in August.

“When I talked to the construction team, they said that they just need six months and the whole house will be completed,” Sims said. “Everybody is on stand-by… the electricians, the roofers, everybody.”

In addition to the museum, which is expected to open during the summer of 2023, Sims also has plans for the lot next door to the house and across the street.

“Across the street, we’re going to build a Community Garden for families to come in and learn how to make their own garden and stuff like that and we’ll probably have two or three chicken coops where they can get fresh eggs and stuff like that as well,” said Sims. “The plan is to teach the community how to be self-sufficient.”

They also hope to secure a grant to build a Community Center. The center will be focused on educating children in various trades, Sims said.

Overall, the excavations provided excitement for those involved in the project, and united the community through common interest, according to Leblanc.

“It’s really exciting to be apart of it, especially seeing all the community involvement and the public interest. I’ve never been on a site where this many people from the community are stopping by asking questions. It’s really awesome to see,” said Leblanc.

Marina Johnson is a correspondent for The South End. She can be reached at newsreportertse2@gmail.com.