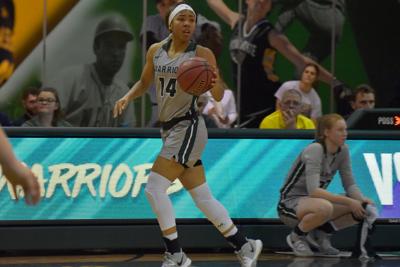 Baskets by Chambers and Johnson gave WSU a 9-8 lead halfway through the opening period. The Eagles used an 18-5 run to take a 26-14 lead after the opening stanza.

Ashland took control of the game in the second quarter, only missing two shots in the period to take a 51-25 lead into halftime.

In the second half, the Eagles’ lead never dipped below 30 points as they clinched the victory.

“I thought we were getting the ball where we wanted to and we missed a lot of layups or easy put backs and shots I think we would normally make,” Lohr said.

“You just can’t afford to miss those against Ashland because they’re gonna capitalize on them on the next possession.”

Johnson scored a game-high 21 points to pace WSU on offense. Lohr said watching Johnson develop into the team’s leading scorer this season has been fun to watch.

“She has just been a really consistent player for us in practice and on gameday (and) I think tonight’s performance was a reflection of how she’s played all year,” Lohr said.

Lohr said the team is excited to face the Bulldogs one more time.

“Our team has not forgotten about that last-second buzzer-beater and I know that they are very excited to have an opportunity to play them again, if that’s where the cards fall,” Lohr said.

Later in the evening, Wayne State men’s basketball lost to Ashland University 83-63 in the team’s final game of the season at the Matthaei on Feb. 27.

Ashland maintained its momentum to end the half, leading 38-27 at the intermission.

WSU made its strongest comeback attempt early in the second half, cutting the Eagles’ lead to 49-44 eight minutes into the period.

“I thought we made a run there in the second half, maybe got it to six or something and we ended up with some unforced turnovers and that really hurt us,” Greer said.

“I feel bad about tonight’s game because it was Karim’s last game and certainly was not of indicative of how he’s played in his four years here,” Greer said.

Another thing that stood out to Greer was the team’s inability to get to the perimeter.

“I thought we shot way too many jump shots tonight and it was really out of character (for us),” Greer said.

“When you shoot jump shots and then you don’t rebound the ball, that’s how they get 44 rebounds.”

Murray, who scored 15 points, said growing as a player and student is what he will remember most.

“Definitely just coming in (and) not having things go my way as a freshman (on) the court and in the classroom,” Murray said.

“I could have easily folded and gave up on everything, (but) I stayed level-headed and kept on pushing.”