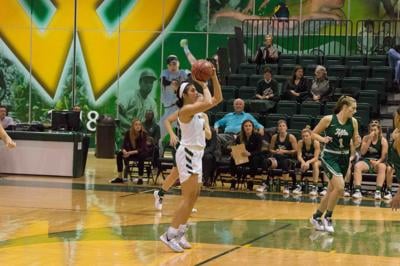 WSU maintained their advantage for most of the quarter and held the Tiffin Dragons scoreless for the final three minutes of the first period to lead 21-8 after one quarter.

Head coach Carrie Lohr said Cherney’s ability to score on the perimeter will be key for the team as they head into conference play.

“We’re gonna need Sam to contribute for us not only just in the rebounding piece or playing defense on post players but really having some confidence and looking to score,” Lohr said. “So it was really great to see her get off to a great start.”

The Warriors maintained a double-digit lead for most of the second quarter, leading 39-23 late in the period before Tiffin scored the final five points of the half to cut WSU’s lead to 39-28 at the intermission.

The third quarter followed a similar pattern to the ones that preceded it with Tiffin cutting WSU’s lead into single digits before the Warriors restored their double-digit advantage. Halfway through the stanza the Warriors used an 11-0 run to take a 56-37 lead.

The Dragons countered by outscoring WSU 8-1 to end the period, cutting their deficit to 57-45 heading into the final quarter.

In the final period, the Dragons made a final push to get back into the game, cutting WSU’s lead to 63-57 late in the fourth quarter before senior guard Nastassja Chambers scored five consecutive points to restore WSU’s double-digit lead and seal the victory.

Lohr said Chambers did a great job taking critical shots for the team late as they pulled away from the Dragons.

“I think she was definitely the catalyst that kind of pushed us through not only to get the lead, but then to help us get the win,” Lohr said. “Those are the shots and those are the situations where I think her experience is showing and I was glad that she was being aggressive with the ball and when she does that I think she gives confidence to her teammates when they see her do that.”

The win improved WSU’s record 5-1 and extended their winning streak to five games. Chambers said the team’s commitment off the court has translated into early success for the team.

“I think we all just buy into the whole idea of it being a process and I think the work that we put in the summer and the preseason and building strong bonds with each other off the court is the reason why we have (a) better start than last year,” Chambers said. “And I think it all goes back to us buying into the process.”

WSU will play its next four games on the road before returning to the Matthaei to play Cedarville University Dec. 21.

Cover photo by Jonathan Deschaine. Jonathan is the multimedia editor for The South End. He can be reached at joanthan.deschaine@gmail.com