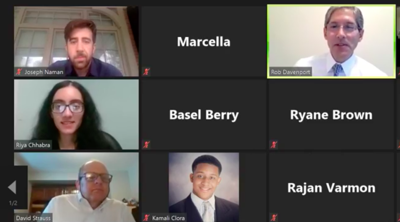 Wayne State’s Student Senate met via Zoom on July 16, with the meeting centered on fall campus life and changes Facilities Planning and Management is making to ensure safety.

A few Senate initiatives for the upcoming term were also discussed at the meeting, with one being voter engagement.

A resolution passed approving $4,500 be allocated to purchase a subscription of the platform Motivote. This platform will be used to help increase civic engagement and voter turnout leading up to the November election.

Teams can be created through the platform with points being given for helping promote voting and voting awareness within the WSU community. These points can then be used to enter raffles and obtain other prizes.

It also allows ease of access to important voting information.

“It’s a one stop shop to really find all your voting information,” Clora said.

The Senate public health project group is working on other initiatives.

“One of the initiatives that our public health project group has been working on is increased access to (personal protective equipment) across campus,” President Riya Chhabra said.

Students will receive three reusable WSU face masks in “swag bags” available before classes and during the first week, Dean of Students David Strauss said. Other contents in the bags include hand sanitizer, an antibacterial pen, and Senate sponsored webcam covers.

Students living on-campus will receive their bags during the move in process. Metro Detroit pick up locations are planned for Aug. 26 on the main campus and some of WSU’s satellite campuses.

Personal protective equipment has been and will be provided to FP&M team members, with a recent order of 60,000 masks made, FP&M Associate Vice President Robert Davenport said during a presentation on changes his team has made to ensure safety.

Since May 1, the WSU custodial team has been fully staffed and catching up on spring cleaning, Davenport said. With campus beginning to re-open, they are getting an idea of what areas will be more populated and scheduling custodians accordingly.

By design, campus will not be at its full capacity.

“With a lower population on campus we will be able to do more in those places where there will be occupants,” Davenport said.

Custodial staff has been trained in proper techniques, according to FP&M’s website. A Facilities Campus Restart Playbook was created, outlining the department’s new operating procedures.

Where other institutions may have struggled to obtain cleaning materials, Davenport said WSU is lucky to have a strong partnership with the company they buy materials from.

“We’re confident we have enough stuff to keep us clean,” he said.

Campus has been at a reduced occupancy over the past few months, and FP&M has made changes accordingly.

“While the campus wasn’t officially closed there were some buildings, and still are frankly, that don’t see the kind of traffic that they once did,” Davenport said.

A flushing program for building water systems was started because of this —preventing bacteria growth in water systems. Building air filtration systems were also upgraded across campus, filtering out more impurities and enhancing air quality.

More fresh air is also being filtered through buildings.

“That seems to be a helpful thing for combatting and helping slow the spread of the (coronavirus) disease,” Davenport said.

While more information is coming at a later date, some details on how the Undergraduate Library will operate in the fall were described.

“This semester more than ever before it’s going to be really important to have your OneCard available,” Strauss said.

OneCards are required to be shown when entering the library as it will only be open to faculty, staff and students. They also may be requested to be seen before entering the Student Center.

Students will have to make a reservation at the UGL and check in at the circulation desk upon arrival. They will then be directed to their assigned study area.

Occupancy at the UGL will be limited, Strauss said. Purdy-Kresge Library may open depending on demand.

“A lot of this is we build the plane as we’re flying it,” Strauss said.