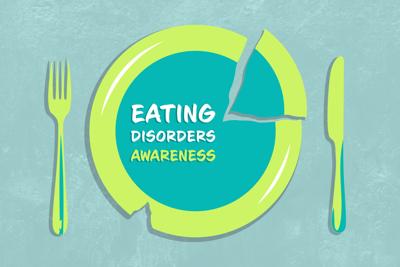 We talk about mental health yet forget that eating disorders are a type of mental illness. They are probably some of the most misunderstood mental illnesses besides personality disorders, schizophrenia, bipolar disorder and dissociative disorders.

National Eating Disorders Awareness Week was Feb. 22 to Feb. 28. In honor of this week, Wayne State student organization Make HERstory hosted the Eat With HER virtual event on Feb. 26.  This event focused on easing anxiety people with eating disorders may experience when eating around others.

“As women that can empathize with other women, we created this event to make all women feel more comfortable having a meal. We’ve noticed that when you are eating with other people, and just having a girl chat, many people feel like it’s okay to eat,” said Deanna Leila, president of Make HERstory.

Why focus specifically on women for eating disorders?

According to the National Eating Disorder Association, national surveys show about 20 million women and 10 million men in the U.S. will have an eating disorder during their life.

Women are twice as likely to have an eating disorder once in their lives than men are. This isn’t surprising, given that social media outlets and the film industry focus more on thin or fit women. Models are mostly seen as skinny and there is barely any plus-size representation on the runway.

Plus-size in modeling isn’t seen the same way to everyday women. Plus-size in the modeling industry is a size six or above. In reality, the average American woman is a size 16 to 18, according to the International Journal of Fashion Design, Technology and Education.

Is it really even plus-size if it is the average size?

No, technically not, but to the modeling industry it is considered plus-size. Victoria Secret didn’t have plus-size models on their runway until 2020.

The most commonly talked about eating disorders are anorexia nervosa and bulimia nervosa. There’s more than those two however, including binge eating disorder, compulsive exercise, laxative abuse, orthorexia and many more.

Gaining weight after starting college is normal, though. For women, we grow into our bodies more once we hit the age of 20. The hips fill-in more, as well as the breasts.

Men start their final growth spurt around the age of 18. Their metabolism might start to slow down, which is an ordinary sign of physical maturation. Weight is normal and body mass indexes’ do not define you.

We must remember as a society that not everyone’s body is the same. People have certain genetics that cause some processes in the body to function differently than others. That doesn’t mean there is anything wrong with them.

Talking about people’s body weight should be unusual. It shouldn’t be acceptable to comment on anybody’s body without a warrant. This is what causes bad body images.

Like I mentioned before, we need to discuss the images we allow the media outlets to force onto us. We also need to start discourses on unhealthy eating patterns. These practices aren’t eating carbs or some fat, but actually harming the body by messing with the natural eating rhythms that are followed through by hormones in the body.

We need to start conversations about negative body images and accept the natural state of our bodies.

To get more resources for eating disorders, please check out the NEDA official site.