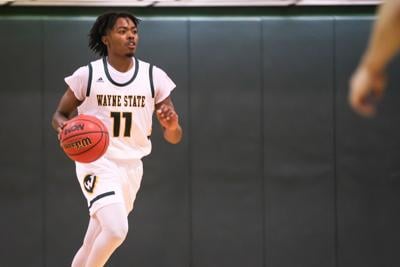 Wayne State University men’s basketball split their series against the University of Wisconsin - Parkside at the Alfred and Bernice De Simone Gymnasium. On Feb. 12 WSU took a 68-64 loss and on Feb. 13 they won 63-60.

Sophomore forward Nate Talbot did not travel with the team this weekend. Head coach David Greer said Talbot’s injuries from WSU’s Feb. 9 game against Grand Valley State University had still not healed up enough to clear him just yet.

“He had some back spasms and we don’t want to risk him riding six hours on a bus and him tightening it up,” Greer said.

On Friday, WSU and UWP wrestled for the lead throughout the first half. Neither team was able to hang onto the lead for an extended period of time. The largest lead of the half for either team was four points.

On paper, WSU’s 54% shooting and 19 rebounds compared to UWP’s 40% shooting and 14 rebounds should have given WSU a big boost on the scoreboard. However, UWP tacked on four three-pointers while WSU only had one. It was enough to keep UWP in the contest as WSU led 31-30.

After halftime, WSU came out looking strong offensively. With 18:54 left in the game, junior guard Antonio Marshall hit his only three-pointer of the game, putting WSU ahead 34-30 to start the half.

Later in the half, with 12:22 left, WSU looked like they had firm control of the game after sophomore forward Avery Lewis nailed a tough layup. That score put WSU ahead 46-37, the biggest margin for either team.

Two back to back three-pointers from UWP with 10:00 remaining diminished WSU’s lead to 48-45. UWP then earned the lead back after senior guard Brailen Neely turned the ball over, and UWP scored a layup on the fastbreak.

Both teams then struggled to gain an advantage over one another for the next eight minutes. With under a minute left, the game was tied at 58-58. Two WSU turnovers on back to back possessions forced WSU to foul UWP with the hopes that they might miss.

UWP did not miss a single free throw in the final minute, resulting in a tough 68-64 loss for WSU. Despite the fact that WSU shot better from everywhere and outrebounded them, UWP outscored WSU’s bench by 23 points and UWP scored 20 times from the free-throw line.

On Saturday, Greer said one of the biggest focuses from his team was to stop UWP from getting to the free-throw line.

“They shot too many free throws yesterday. It was just some uncharacteristic plays from us and something we definitely needed to clean up. I think we just needed to play smarter,” Greer said.

With 12:28 left in the first half, UWP scored off a three-pointer that elevated them to an 8-6 lead. Unfortunately for UWP, it was the last time they would have the lead all game. WSU picked up the lead shortly after with 11:11 left in the quarter off a layup from junior guard Darian Owens-White.

Owens-White and Neely were important factors in ensuring that WSU led 32-26 at the end of the first half.

Neely got the second half started right for WSU as he hit a three-pointer only 11 seconds into the half, putting WSU up 35-26. Neely would later finish the game with a new season-high eight assists and he led the team with 25 points.

Greer said he thought Neely’s improvement over the series was a huge boost for WSU.

“Brailen wasn’t so good yesterday, he was careless with the ball and let his man make so many shots. But I give him a lot of credit, he cleaned those things up and it was the difference in us winning and losing today,” Greer said.

WSU wouldn’t repeat the same mistakes again and they tightened up on defense this time around, with far fewer fouls. Without the opportunity to go to the line as much, UWP became more dependent on their three-point game.

A three-pointer with less than one second on the clock came up short and WSU avoided another overtime game. With that, WSU defeated UWP 63-60.

By splitting this series, WSU put themselves in first place in the entire Great Lakes Intercollegiate Athletic Conference. Greer said he wasn’t worried about the rest of the season, that is if WSU could play at a consistent level from here on out.

“I don’t think this puts any pressure on us. Everybody’s gotta go through the same process, and we have a tough game coming up. We just have to take these games one at a time and make it happen,” Greer said.

WSU will have a tough challenge when they travel to the Charles Kates Gymnasium to face off against Ashland University on Feb. 16.