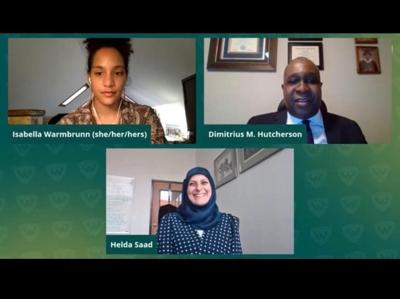 Wayne State’s Office of Multicultural Student Engagement and Dean of Students Office hosted “Looking Ahead to Juneteenth: Financial Wellness in Communities of Color” on Thursday.

Juneteenth, which celebrates the emancipation of Black people in the U.S., is recognized annually on June 19. Leading up to the holiday, WSU organized a series of panel-style talks highlighting different aspects of Juneteenth. This discussion was the third installment.

Moderated by Isabella Warmbrunn, a student who assisted WSU Student Senate in getting Juneteenth recognized as a university holiday, the event discussed how the Black community could build financial wellness.

“As we look forward to Juneteenth, it is important to acknowledge the role that African Americans have played in the economic accomplishment of the United States,” Warmbrunn said, reading the event description. “It is concerning since they lack in average in accumulative wealth and income compared to the white population. There is a significant gap between income and wealth.”

Two representatives from First Independence Bank on Woodward and Grand Boulevard, a Black-owned branch, discussed these disparities and future solutions.

Dimitrius M. Hutcherson, chief administrative officer, said the branch was established due to tensions in Detroit in the 1960s.

“It was one of the positive outcomes out of the 1967 riots,” Hutcherson said. “Shortly after the riot, leaders and activists and business leaders in the community started a meeting and they wanted to figure out a way on how they could create financial independence for Black people and people of color. Out of the discussions, they came out with the concept of trying to stand up and open a bank that would help to focus on that.”

Hutcherson said the African American community could benefit from how other ethnic groups pass down financial tactics generationally.

“It gives you the power to control and to some degree manage how you want to live and position to live your best life down the road,” Hutcherson said. “... what financial education does, once you obtain it, it becomes something that can't be taken away. It allows you to take control of some aspects of your life.”

Warmbrunn said the First Independence Bank branch being such a short distance from the WSU campus is significant.

“It is really important because there is a bank that is Black-owned doing stuff for the community and people should acknowledge that and there are so many amazing things that you are offering,” Warmbrum said.

The recording of “Looking Ahead to Juneteenth: Financial Wellness in Communities of Color” can be found on the WSU Live Events page.