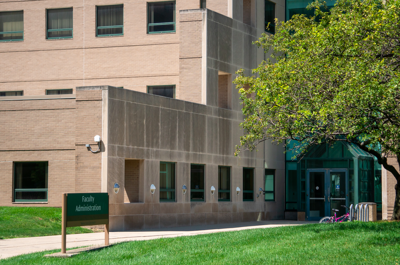 The U.S. Department of Education’s new Title IX regulations went into effect on Aug. 14, requiring Wayne State —and other recipients of federal financial assistance— to change their processes in compliance with the new rule.

Secretary of Education Betsy DeVos announced the new regulations on May 6.

Schools had to be in compliance with the new regulations within the 100 days after the announcement, said Brandy Banks, WSU Title IX coordinator and director.

“WSU has implemented an interim policy and procedures which will remain in effect a period of six months,” Banks said. “This will allow the opportunity for appropriate consultation with key stakeholders before the Board of Governors is asked to adopt a permanent policy on sexual misconduct.”

The new Title IX regulations narrow the definition of sexual misconduct to "any unwelcome conduct that a reasonable person would find so severe, pervasive and objectively offensive that it denies a person equal educational access," according to the U.S. Department of Education.

Schools are required to dismiss complaints if the alleged conduct does not fall under the new ruling’s definition of sexual harassment, Banks said. Complaints are also dismissed if they are not connected to a school’s program or activity and if they did not occur in the U.S.

“Such a dismissal does not preclude action under other institution policies/procedures,” she said.

Jurisdictional changes were also implemented, Banks said. Schools are required to respond to sexual harassment reports off-campus if the location is affiliated with the university, such as fraternity, sorority or athletic housing.

It is also a new Title IX requirement to provide evidence to cross-examine the complainant, the accused party and any witnesses during a live hearing led by institution officials.

“A party may select an advisor of their choosing to participate in the hearing. The person could be a teacher, coach, parent/guardian, attorney or any other person chosen by the party,” Banks said. “If a party does not have an advisor, the institution is required to assign an advisor to conduct the cross-examination.”

Deanna Leila, president of Make HERstory, said the new regulations are not fair.

The WSU student organization Make HERstory launched in June with the intent to ensure a safe space for all women and direct people to information and resources for supporting women, Leila said. The group also sheds light on undiscovered female artists and women in different occupations.

“I feel like the new changes are benefiting the perpetrator rather than the victim,” she said.

Cross-examination is a traumatic experience for the victim because it requires them to recall the event of sexual misconduct with the perpetrator and council present, Leila said. This could make the traumatic events difficult to recall due to the emotional strain

Detroit Slutwalk is a community organization of intersectional feminists from various groups around metro Detroit, working together to educate about consent and abolish rape culture, according to the organization’s Facebook page.

“I'm not surprised because Betsy DeVos is a huge step in the wrong direction. There's a lot of stuff happening to people who are speaking out,” she said.

Watkins fears the changes to Title IX could further intimidate victims into not reporting sexual assault, she said.

“Police can be intimidating but there are other resources that can help,” she said.

“The University remains committed to ensuring an environment free from sexual harassment while also ensuring compliance with federal law and the Title IX office continues to be available to members of our campus community,” she said.