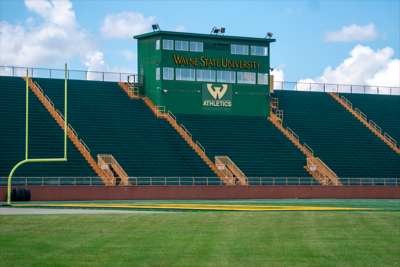 The GLIAC announced the creation of its “Champions for Change” initiative last month. The primary focus of the program is to increase inclusion and diversity at the conference’s schools.

The initiative, adapted from the conference’s slogan, “Where Champions Compete,” was part of commissioner Kris Dunbar’s five-year strategic plan when she entered the position in 2016. Assistant Commissioner Marcus Thatcher, the program’s advisor, said GLIAC began the framework for the program in the fall of 2020.

“We talked about our Diversity and Inclusion committee and how we could make that more effective (and) see some actual change instead of just being a checkmark or a box that we have this committee,” Thatcher said.

The COVID-19 pandemic stalled the program temporarily as spring sports were canceled in March 2020, and GLIAC focused on whether games would be played in fall 2020. However, Thatcher said creating the task force was prioritized due to widespread Black Lives Matter protests in summer 2020 and ensuing conversations about systemic racism.

“It was really important for us to join those conversations as well, but we didn’t want to (feel like) we have this task force because everyone else is doing it and we’re bringing people together just for looks or to have a Tweet or a PR campaign,” he said. “We really wanted to be meaningful and intentional.”

In compiling the task force, GLIAC received nominees from each member institution. Wayne State football Head Coach Paul Winters, WSU’s representative for the program, said he found out about the initiative from Director of Athletics Rob Fournier.

“I understand that it’s a very important position and it’s a very necessary position,” Winters said. “So I was pleased that they felt that I could handle that.”

“It’s very important (and) either way it was going to happen,” Wilkerson said. “I’m glad that it happened while I was here.”

Wilkerson said he is excited to see the program grow and hopes to tell people years down the road about its beginnings.

Winters said the program’s blend of administrators, coaches and athletes was crucial for the early stages.

“I thought having the athletes on it was important,” he said. “(If) you’re talking about diversity and inclusion, you should have a diverse group and they did.”

Winters said GLIAC student-athletes should understand they have a platform to share their concerns.

“It’s such a difficult time and there’s so much going on in the country and the world,” he said. “It’s just important that we address some things and maybe (have) the tough talks that we didn’t have years ago with the young men and women that are playing collegiate athletics.”

At the height of Black Lives Matter demonstrations last summer, individual schools within the conference began exploring how they would handle potential protests. Thatcher said GLIAC’s focus during that period was connecting with student-athletes.

“I think the biggest thing for us was we just wanted to let our student-athletes who might have been hurting or feeling icky during everything,” he said, “We just wanted to let them know we hear them, we acknowledge their pain and some of the frustration they might be showing.”

Winters said he hopes the program demonstrates to diverse student-athletes that they are welcome in their schools.

“What we’re hoping for is that all athletes will feel that each university in this conference, and really all over is open to them,” he said. “And they don’t have to fit into a certain category. They’re a human being that is being accepted for who they are and what they contribute to the different programs.”