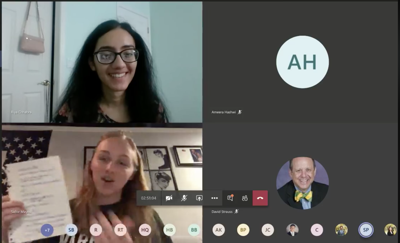 In a virtual conference, the Student Senate elected a new lineup of leadership positions, bidding farewell to outgoing President Stuart Baum. The following students were elected to serve the 2020-2021 Senate term:

President Riya Chhabra was nominated by Basel Berry and elected with no challengers. She’ll be entering her senior year as an honors public health major. Previously, she served as director of student services. During that time she backed several initiatives, which include adding menstrual products to school vending machines and adding a mental health curriculum to the First Year Seminar class for incoming freshmen.

As president, Chhabra said she hopes to make support from the elected board more accessible to senators’ initiatives by digitizing more functions, as will be necessary if the fall semester is online. After assuming the presidency, she offered kind words to Baum.

“Thank you Stuart for such a great presidency these last two years. You’re someone I really look up to, so I hope I can be half as good as you are,” Chhabra said.

Vice President Marcella Eid was elected with no challengers. She’s going into her senior year as an honors political science major. During her junior year, she served as director of public relations. In discussion, multiple senators praised Eid’s work ethic for her previous PR position.

“Honestly, our PR has never been better,” Jasmine Coles said.

As vice president, Eid said she hopes to strengthen relationships with community members outside of the Senate. Eid served as a senator at large from 2018 to 2019, where she backed recycling and facilities initiatives.

Parliamentarian Basel Berry was nominated for a second term by Chhabra and elected with no challengers. He’s entering his senior year as a biological chemistry student and plans to attend medical school afterward.

“This coming year, we will work together. One hand, one family to keep our campus in its best picture and to make sure that no student is left behind, for every student on our campus to be successful,” Berry read from a prepared speech.

Treasurer Jasmine Coles was nominated by Berry, Sailor Mayes and Kamali Clora, and voted in with no challengers. She’ll be entering her fifth year in the Student Senate and is a medical student. She majored in biological sciences with minors in health psychology and public health.

“She’s a critical thinker. I love the questions she brings to the table. She helps deepen the discussion,” Clora said.

Over the course of her Senate career, she’s backed a “conversation cafe” for black students on campus. Other past initiatives include bringing in more Counseling and Psychological Services counselors and fighting tuition increases.

Wiljanen will be entering her senior year as a nursing student. Last term, she was the College of Nursing representative. Previously, she’s backed initiatives related to sustainability and environmentalism.

Director of Governmental Affairs Sailor Mayes will be entering her sophomore year at the College of Liberal Arts and Sciences. She’s the president and founder of Students Demand Action, a student organization that convinced the Board of Governors to declare the first week of February as National Gun Violence Survivor Week on campus. She also backed the Senate initiative to make Election Day a school holiday.

Director of Community Affairs Ameera Hashwi is entering her senior year as an economics major with a minor in pre-law. Previously, she served as a senator at large.

Director of Student Services Kamali Clora is beginning his fourth year as an honors public health major. He’s the co-president of The Brotherhood, a student organization which “aims to help minority males become not only successful college students today, but great leaders of tomorrow,” according to its page. Previously serving as a senator at large, he’s backed issues related to black graduation and student services.

Director of Public Relations Joseph Naman will be entering his senior year as a finance major. Last term, he served as secretary.

The new Senate will virtually meet on May 21 at 6 p.m. for its first general body meeting.