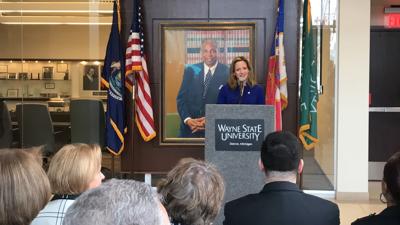 “This holiday will afford faculty, staff and students with the liberty to put their civic duty first,” Wilson said.

The on-campus polling location will begin operation on Tuesday, March 10 for the Michigan Democratic Presidential Primary.

This initiative was led by Student Senate and was in the works for about a year before this announcement. Senate President Stuart Baum said it makes him happy to see talks become reality.

“I’m so happy not only that we got it done, but that the university, city and state really taking ownership and embracing the work that we’re doing — that’s what’s impactful to me,” he said.

“Students and non-student residents alike, will be able to vote and work the polls together, thereby bridging divides and building community right here on campus,” Baum said.

WSU was recognized as a Platinum Seal Campus in 2018 for a 53.1% voting rate. An increase of young voter engagement on WSU’s campus and other college campuses is the goal of the Secretary of State’s Collegiate Student Advisory Task Force Baum is a part of.

Secretary of State Jocelyn Benson said this incorporation of an on-campus polling location is an outgrowth of the work done by the Task Force.

“I expect and hope other universities follow suit and that hopefully this will become a norm on all of our college campuses across the state to have precincts or other ways of engaging voters on campus,” Benson said.

Benson was the former dean of Wayne Law and worked with Judge Damon J. Keith for several years, before he passed away last April.

“It is so wonderful to me that we are here a year later, celebrating and doing exactly what I know Judge (Damon J. Keith) would be wanting us to do,” Benson said. “Celebrating the opening of democracy, the expansion of voting rights here right in the city of Detroit, at Wayne State University in the center that bears his name.”

Although spring break will be in effect, students living on campus and residents of Precinct 149 will be able to vote at the Keith Center. Free parking will also be available for voters every election day.

Students need to register their on-campus address in order to vote at the location. To register to vote or for more information regarding the polling site, visit Student Senate’s website.

Cover photo by Malak. Malak is the news editor for The South End. She can be reached at newseditortse@gmail.com