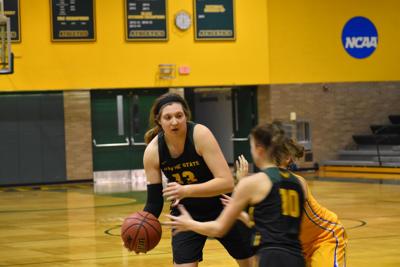 The Wayne State University women's basketball team split their series against Northwood University at the Matthaei Center. WSU won 77-69 after pulling off a second-half comeback on Jan. 22. However, they lost 78-63 after a slew of injuries were too much to overcome on Jan. 23.

Sherwood and George led WSU in scoring throughout the weekend but were unable to return after getting injured. Head Coach Carrie Lohr did not provide an update on their condition or what type of injuries they sustained. The injuries were not a result of the short turnaround teams have in the COVID-19 pandemic, Lohr said.

"I think today was a physical game. I think they just took some bumps and hits that caused them to land awkwardly. It's unfortunate and we'll know more over the next couple of days," Lohr said.

Prior to the injuries, WSU was riding the high of pulling off a 19 point comeback on Friday. NU began running away with the game at the latter end of the first quarter, where they led by six points. By halftime, it looked like the game was over as WSU fell behind by 17 points.

Lohr believes the effort WSU showed after halftime revolved around rebounding the ball and making defensive stops, she said.

"They really showed some toughness. They really needed to focus on one stop at a time. If you look at the clock, we had plenty of time. We know they're not going to score every time, the ball's going to come off the rim. And we rebounded them like 33-11, and I think that really made a difference,” Lohr said.

George played a significant role in the second half comeback. She scored a career-high 30 points off 10-20 shooting with 4-5 from beyond the arc and grabbing 12 rebounds. It was the second double-double of the season for her.

"I thought Kate was the player of the game. She proved yesterday that she's certainly capable of scoring the basketball. She was coming off a weekend where she was 0-8, and so I thought her mental toughness and will to push through was fun to see," Lohr said.

Despite the win on Friday, turnovers loomed over WSU's shoulders during that game. They carried over to Saturday's game as well. Throughout the weekend, WSU committed 29 turnovers to NU's 13.

Part of the turnover problem is that, at times, WSU looks to make big plays instead of efficient ones, Lohr said.

"I think sometimes we want to hit the home run and it's ok to just get a single. We want to make great plays instead of just making good, solid plays. It's not that I think that they're being reckless, but, especially from behind, they try to make a great play instead of a good team play," Lohr said.

Heading into their next game, with questions looming over what the lineup may look like come Tuesday, Lohr said she believed there were many factors to take into account and players who need to step up.

"We gotta stick to controlling the boards, minimizing turnovers, and defending the three-ball. We have four seniors, Kara Wilson, Ariel Bethea, Anna Ruhstorfer and Tori Perez, and they need to rise to the occasion," Lohr said.