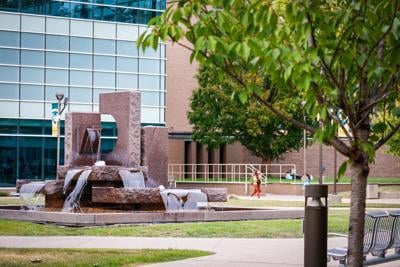 During the President's report, Senate President Yousra Zouani said Senate will be hosting a Presidential Search listening party Nov. 10 at 6 p.m. in light of Wilson’s resignation from his position as WSU President.

Zouani said this event will allow members to discuss qualities and possible projects they’d like the next President to focus on to the Board of Governors.

Bedi said the top enrollment in the honors college is from Wayne County, followed by Oakland County and Macomb County. She said the committee would like to diversify the population of honors students at WSU.

The honors college currently has a graduation rate of 15.3% — the highest it’s ever been, Bedi said.

Dabaja said RCR teaches students how to properly conduct research and what to expect in a research environment.

“I have met with a representative from the OMSE (The Office of Multicultural Student Engagement )-- Stephanie Hawkes, and when I presented this idea to her, she expressed deep interest in bringing it into fruition,” he said in an email to The South End on Oct. 10.

Bedi said in an Oct. 10 email to TSE the Community Affairs Project Group plans to provide campus with better access to contraceptives.

“The expansion goals are to get the contraception in more vending machines and (in) more buildings,” she said. “Additionally, we’re looking to have different forms of contraception and connecting more with the Campus Health Center.”

The project currently stocks condoms for $4 in one vending machine in Chatsworth Suites, and Bedi said the plans are to expand to other residence halls on campus.

The Parking Pass initiative will begin production once the initial process for creating them is finished, Bedi said.

The next Senate meeting will be Oct. 20 at 6 p.m. in Student Center Room Hilberry AB.

Ashley Harris is The South End's managing editor. She can be reached at managingeditortse@gmail.com.

Cover photo by Alivia Vandale. She can be reached at gw8302@wayne.edu.