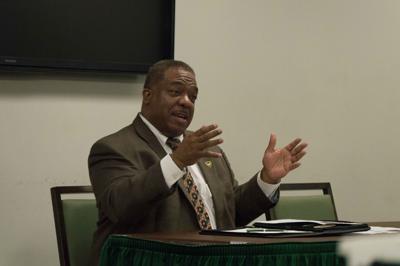 The Nevada System of Higher Education’s Board of Regents named Wayne State Provost Keith Whitfield president of University of Nevada, Las Vegas at its July 23 meeting, which was live streamed on its website.

On Wednesday, a search committee unanimously voted to recommend Whitfield for the position, according to the Las Vegas Review Journal.

The BOR made the official decision, unanimously approved with one absent vote.

“This is truly, truly an honor. This is a university that I’ve had great respect for,” Whitfield said after the vote.

“I actually have to share with you that I shared this possibility, it’s a reality now, with my mother last night and I don’t think I’ve ever heard her scream, and she actually screamed with excitement because I think we all know this university and its history and its legacy and to be able to be a part of that is something that I can’t express in words.”

His position as president of UNLV will start on August 24, 2020, according to the president employment agreement.

WSU hired Whitfield as provost and senior vice president for academic affairs in 2016, according to the university’s website.

“I am always glad when talented, hard-working people are rewarded with greater opportunities, and UNLV is a just reward for Keith’s tremendous contributions to Wayne State — but Keith is a colleague and friend,” WSU President M. Roy Wilson said in a statement emailed campus wide. “While I am happy for this opportunity, and grateful for all he has done, I will miss him personally and professionally.

Whitfield’s leadership as provost spearheaded programs like the Warrior Way Back and the Heart of Detroit, according to Wilson’s statement. During his time in the position, WSU’s six-year graduation rate surpassed 50% —one year ahead of the strategic plan—and the African American graduation rate tripled.

Before coming to WSU, Whitfield was the vice provost of Duke University. While at Duke, he also served as professor in the department of psychology and neuroscience, the Department of Geriatric Medicine at Duke University Medical Center and senior fellow at the Center for the Study of Aging and Human Development.

Members of UNLV’s community are excited about the decision, Regent Lisa Levine said at the meeting.

“You are a dynamic leader and I know that you are going to be able to lead UNLV,” she said. “Not just through the three crises you’ve mentioned from health care, economic and social justice, but that you are going to put UNLV in a place of strength so that when we come out of this we’re in a stronger place than ever before.”

An interim provost will soon be named to step in for Whitfield when he starts his new position, Wilson said. The search process for a permanent provost will begin immediately.

“Keith has made an enormous positive difference at Wayne State, and he will be hard to replace,” he said. “I know you all join me in wishing him well in his presidency at UNLV, and I know that even though he’s about to become a Rebel, he will always have the spirit of a Warrior.”

Cover photo by Jonathan Deschaine. He can be reached at jonathan.deschaine@gmail.com