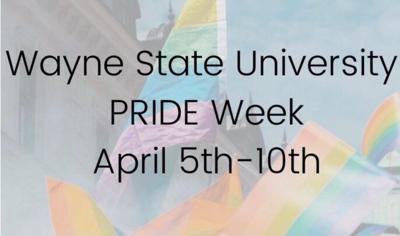 Several events —from social lunches to organized panels— were hosted by the Office of Teaching and Learning; Gender, Sexuality and Women’s Studies Program; the Office of Multicultural Student Engagement; and LGBTQ student organizations.

“I think it’s an opportunity to really highlight the diversity at the campus, and show the surrounding community that all students are accepted and welcomed here at the university,” Savala said.

Student engagement has been a challenge throughout the COVID-19 pandemic, Savala said.

“Last year, for the first time, we had a drag show, and that was incredible. But of course this year that hasn’t been able to happen,” said Isha Ghosh, psychology major and co-president of Joining Intersectionality, Gender, Sexuality and Allies at Wayne. “QTPOC (Queer + Trans People of Color) was the org behind that, but I know since the pandemic began they’ve really fallen off the radar, and a lot of us have lost a lot of the momentum that we had going into the new year.”

JIGSAW’s Pride Prom —typically held in October— was cancelled in 2020 due to the pandemic, Ghosh said.

JIGSAW played Jackbox and answered student questions about the organization at its April 7 general body meeting.

OTL also partnered with the Gender, Sexuality, and Women’s Studies Program on April 7 to host LGBTQIA+ Skill Share and Strategy Exchange. Presenters from several departments discussed how they work to make education material and the classroom inclusive for all students.

“Pride week gives such an incredible spotlight on what we have to offer,” Jeffrey said. “(T)here are a lot of discussions that are happening this week that talk about the issues across campus, and I think that's just as important as celebrating because these panels that we’re going to are coming up with not just highlighting the problems but they’re coming up with solutions.”

“It was so fun. I didn’t win, but I didn’t care because it was just — it was wonderful to see everyone, and most people had their cameras on,” Jeffrey said.

LGBTQIA+ Student Equity had panelists from high school to WSU students and beyond who discussed their experiences as students and what people can do to support students.

Kristin Johnston, OMSE advisor for student engagement and academic advisor, said she appreciated the virtual week, in an April 12 email to The South End.

“WSU PRIDE Week was such a wonderful celebration of our WSU LGBTQ+ community. The cross-campus collaboration was great to see in lieu of being in person. I continue to be impressed by the work of GSW and DOSO,” Johnston said.

A virtual rainbow graduation will take place April 23 from 11 a.m. to 1 p.m. Savala said there will be keynote speakers and scholarships will be awarded. Ghosh said they will also be a part of the ceremony.

“It’s a wonderful program, and it's a time for us to celebrate the rich diversity within the LGBT community at Wayne State University,” Savala said.

Savala said OMSE is working on developing an ally-training program for faculty and students that will be available in the fall.