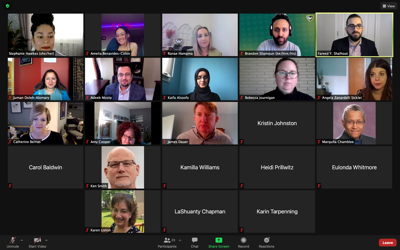 The Wayne County Commissioner’s Office officially declared April as Arab American Month on April 1 and the Wayne State community commemorated the month with a virtual panel on April 20.

Office of Multicultural Student Engagement Director Leonard Savala and Assistant Director Stephanie Hawkes hosted the event, which consisted of six members of WSU staff and faculty who identify as Arab or Middle Eastern.

One of the first questions Hawkes asked pertained to the difference between “Arab American” and “Middle Eastern.”

Ranae Hamama, manager at the Transfer Student Success Center said the difference lies in how an individual chooses to identify, as the two terms are very different.

“While Chaldeans share roots and some traditions with Arabs, it is their language, culture and history that makes them distinct,” Hamama said. “Many Chaldeans identify as Catholic Iraqis or ‘Middle Eastern,’ which is geographic rather than cultural.”

Another question Hawkes asked the panel focused on common misconceptions that are held against people of Arab American or Middle Eastern descent.

Adeeb Mozip, director of Business Affairs at WSU Law School, said he traces his lineage back to Yemen and spoke at the panel about misconceptions affecting his personal life.

“The combination of orientalism and islamophobia has dehumanized the image of Arab Americans and presented them in negative ways,” Mozip said.

To combat harmful stereotypes, Mozip said he spreads awareness of his background.

“I take the time to educate people around me about our culture when I can and explain how rich our culture is from all aspects,” Mozip said.

Fareed Shalhout, associate director of Student Programs, is of Palestinian descent and said he has struggled with assimilation as an Arab American.

“Growing up in Detroit and attending Detroit Public Schools, I had to marry the two: being Arab and being American,” Shalhout said. “My identity as an Arab American strengthened during my undergraduate years through being active in the Arab Student Union and being more aware of who I am.”

Metro Detroit, specifically Wayne County, has the highest concentration of Arab Americans in the United States, according to the U.S. Census.

WSU senior sociology major America Yahya was born in the United States to Yemeni parents and she struggled with balancing her two cultures growing up, she said.

“I feel like the beauty of it is that we can make it what we want and whoever hates ... they can go somewhere else because we're here to stay,” Yahya said. “We are worthy. We are just, we are enough of both sides.”

Amelia Benavides-Colón is a contributing writer for The South End. She can be reached at hd4634@wayne.edu. Screenshot taken by Benavides-Colón at the April 20 virtual panel.