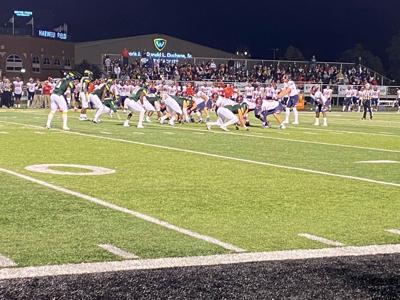 Wayne State football suffered its fourth consecutive loss of the season to Saginaw Valley State University Saturday, with a score of 41-21.

WSU got the ball to start, and on its first possession, ran three plays for a total of four yards. This was a familiar tune for the Warriors’ first-half performance, as they had three first downs in the first half.

During the first half, the Warriors committed their first of four total turnovers when redshirt freshman running back Myren Harris fumbled the ball on their 42-yard line.

Head coach Paul Winters said he was disappointed in the number of turnovers WSU committed.

“From an offensive standpoint, turning the ball over four or five times is never acceptable against anybody, and there is no way you should ever be in a game when you turn the ball over that much,” Winters said.

The Warriors converted 36% of their third-downs compared to SVSU’s 60%. This made it even more challenging to succeed on offense.

WSU rotated quarterbacks throughout the game, often going with redshirt junior quarterback Chase Churchill in passing down situations. Still, Winters said it was difficult to allow Churchill to get comfortable in the first half.

“It was really bad. We got to get a rhythm, that was one of the things I tried to do in the first half was give Chase a chance to get in a rhythm,” Winters said.

The first quarter of the game was scoreless. The SVSU Cardinals scored their first points during the second quarter in the form of a field goal.

WSU gave up 17 points in the second quarter and went into the second half with zero points.

Following halftime, SVSU marched the ball down to the Warriors’ three yard line. However, WSU made a big stop when redshirt junior linebacker Niko Mosely made a tackle to force fourth down. SVSU opted to take a field goal, where they were successful.

Later, the SVSU Cardinals scored a touchdown, putting them up 10-0 with 2:52 left in the quarter.

The SVSU Cardinals scored again late in the second quarter, taking possession on their 48-yard line. They then drove the ball down to the Warriors’ 11-yard line and scored a touchdown.

Despite the Warriors’ offensive woes in the first half, they managed to make a late-game resurgence.

WSU had back-to-back touchdowns in the fourth quarter, bringing the score to  27-14.

The Warriors managed their first points of the night with a 10 play drive.

Redshirt sophomore running back Chandler Edwards and redshirt senior running back Avery Hall fought hard to gain yards in chunks. Graduate student quarterback Jake AmRhein and Churchill also got in on the drive.

WSU scored on a pass by Churchill to redshirt sophomore wide receiver Trevonte Davis. Davis then ran it 57-yards into SVSU’s endzone.

The Warriors scored again but this time it was their defense who came up big.

Redshirt senior outside linebacker Brandon Tuck-Hayden forced a fumble on SVSU. WSU redshirt sophomore cornerback Koriante Moore then recovered the ball and ran it 50-yards for a touchdown.

SVSU extended its lead to 34-14 on its next drive, scoring on a goal-line run.

Churchill passed to Harris, who ran it in for 32-yards. This brought the score to 34-21 in favor of SVSU.

Following that, the Warriors went for an onside kick with only 1:08 left in the game. However, they committed an offsides penalty and never recovered the ball.

The SVSU Cardinals got the ball on WSU’s 43-yard line. On the first play, they found a hole in the Warriors’ defense and took off for an SVSU 43-yard touchdown run.

The Warriors failed to surmount a comeback with 52 seconds left on the clock.

Winters said he was proud of his team's efforts to fight back late in the game despite being down early.

The Warriors will play their first conference game against Northern Michigan University at the Superior Dome in Marquette on Saturday.

David Carter is a contributing writer for The South End. He can be reached at gq1784@wayne.edu.