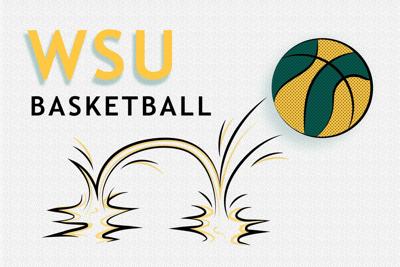 On Saturday, the No. 5 seed Ashland men’s basketball team beat No. 4 seed Wayne State Warriors 76-61 in the opening round of the NCAA Division II Men’s Basketball Tournament at the Ford Center in Evansville, Indiana.

Prior to this game, the Warriors won both games against the Eagles in their regular-season series. However, this game was the Warriors’ first appearance in the NCAA tournament since 2013.

In the opening four minutes, both teams made a pair of three-pointers each. The Eagles gained the early advantage with a 10-8 lead with 15:58 remaining in the first half.

One big issue for the Warriors this season was early foul trouble, forcing the team’s starters onto the bench early. This occurred Saturday as junior guard Antonio Marshall picked up an early foul. The Warriors pulled Marshall out of the game early, subbing in his place sophomore forward Kylin Grant.

Later, with 14:17 in the first half, the Warriors committed their fifth turnover of the half. This continued to be a running issue for the Warriors and Head Coach David Greer, the 2021 GLIAC Coach of the Year, said turnovers caused the team problems all game.

“Ashland plays good defense, but I think a lot of our turnovers were just self-inflicted. We were just trying to force the ball where it didn’t belong and dribble into traffic. It got us into trouble and it showed,” Greer said.

After a barrage of three-pointers from the Eagles continued to rain down on the Warriors, the Eagles took a 25-17 lead with 10:46 in the half. Greer said the Warriors had problems defending from the perimeter.

“Brailen [Neely] and Darian [Owens-White] had their issues. Just defending didn’t come easy to them. It created a lot of problems for us. But, hell, we really couldn’t defend from anywhere so it doesn’t matter what we generated on offense, we couldn’t stop them,” Greer said.

Coming back from a media timeout with 10:41 in the half, the Eagles switched their focus to scoring inside the paint and the Warriors had no answer for that either. The Eagles proceeded to score inside as the Warriors committed two turnovers on their ensuing possessions.

The Eagles then shifted their scoring focus back onto three-pointers and took a commanding 32-21 lead with 6:34 left in the half. For the remainder of the half, the Warriors’ defense tightened down on the perimeter and stopped the Eagles from making any shots from the arc.

The Eagles committed two turnovers to end the half, but the Warriors were only able to capitalize on one of them. Heading into halftime, the Warriors had brought the game back to within only a 36-30 deficit.

Despite the glaring turnover issues, the Warriors had an advantage in rebounding. But Greer said he thought the edge the team had in rebounds wasn’t enough, as his players were committing a number of mental errors.

“After we rebounded, we probably just turned it over. That just makes it a wash, getting a rebound only counts if you do something with the possession. If you add in the turnovers with the rebounds, I’m sure it all equals itself out,” Greer said.

The Warriors managed to keep the game within single digits in the opening minutes of the first half, relying on free throws from Neely and sophomore forward Avery Lewis. However, the team could never find a shot beyond the free-throw line.

With 11:52 left in the half, as the Eagles were leading 49-43, the Warriors’ offense and defense were halted in almost every way. With 5:46 remaining in the quarter, a combination of missed shots and weak defense from the Warriors led to a 17-5 run from the Eagles, culminating in a 66-48 lead for the Eagles.

The Warriors never recovered for the remainder of the game, and the Eagles ultimately came out on top. The Warriors came up short in almost every statistical category when compared to the Eagles. The Eagles beat the Warriors in field goals made, three points made, free throws made, assists, steals, points in the paint, fastbreak points and bench points.

Greer said he thought the biggest impact on the game came from the Eagles’ stamina and ability to fight through contact.

“I think what really made the difference was just how tough they played. We were spent at halftime and I think they controlled the tempo of the game because of it,” Greer said.

The Warriors ended the season with a 12-5 regular-season record. Despite the disappointing end to the season for the Warriors, Greer recognized WSU Athletics for making a season possible amidst the COVID-19 pandemic, he said.