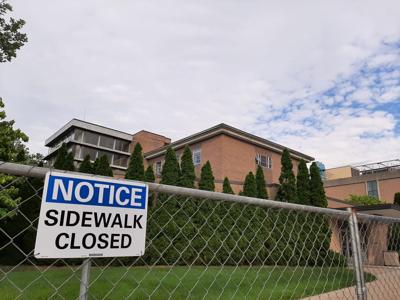 After four years of planning and millions of dollars in renovations, Wayne State’s State Hall is officially closed and under construction until Fall 2023.

With renovation plans expected to take over a year, all classes will be  moved to other buildings on campus in the fall 2022 semester, said Facilities Planning and Management Director Ashley Flintoff.

Flintoff said the renovation process will begin this summer.

“This is actually a full renovation of the entire building, including all building systems,” Flintoff said. “It’s a $70 million dollar project and will involve all new HVAC (heating, ventilation and air conditioning), all new electrical, new finishes, new furniture and selective demolition.”

The WSU Board of Governors unanimously approved the renovations in a Jan. 2021 meeting, The South End reported. Student Senate reviewed the plans at a Dec. 2021 meeting, when FPM was in the schematic design stage of the process.

“I think that students and faculty will be thrilled to see a new State Hall,” she said. “This will be all general-purpose classrooms and it will have technology that will enable classrooms to support traditional lectures and active learning. We’re also building in quite a number of third spaces or sticky spaces which are basically spaces outside of the classroom.”

“I hope they can have elevators that don’t break down every day as many students that need the elevator often have to wait forever to get to their class,” Grayer said.

In March, Grayer spoke to TSE to express her concerns about temperature controls in State Hall during the winter semester.

Grayer said she is interested to see the renovations but said it could be better communicated with students whose classes are being moved due to construction.

“I think Wayne State needs to communicate more about the renovations to students, not just over email but over social media because that’s the way a lot of students get their news. If it wasn’t for The South End, I wouldn’t even know what the idea for State Hall was,” she said.

Grayer said she learned about the renovations over a post on social media — however she was unaware of its extent.

“I do enjoy the old charm of State Hall like the lockers and just the overall vibe and it gets the job done for most classes,” George said. “But I disliked the fact that it did seem run-down in some places, like the chalkboards were flimsy and the pants (paint) was chipping off (the walls).”

Flintoff said FPM learned what could benefit students and faculty the most through discussion and engagement with students on campus.

“We went out and had a booth at Festifall this year. We had an advisory committee that had representation from Student Senate and Academic Senate. We also had conversations with the Dean of Students Office and the Muslim Student Association,” Flintoff said. “So we tried to — as broadly as we could — gather feedback from the campus community as a whole and then take all that feedback into consideration.”

George said she would appreciate keeping some of the artifacts from State Hall in the newly remodeled building.

“My concerns about the renovations is that we could lose some of the old charm so I hope they still incorporate the lockers and stuff like that but I think the renovations could be good, especially the lounge areas,” George said.

Renovations are expected to be completed during the summer of 2023, reopening for classes in time for the fall 2023 semester.