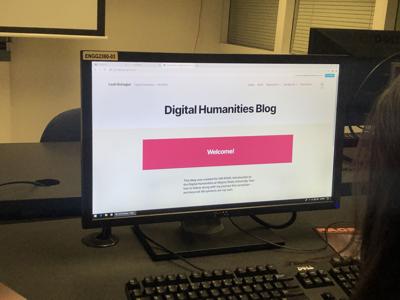 Digital humanities focuses on the intersection of digital technology and social-science research, according to WSU’s website.

Instructor for Introduction to Digital Humanities, Jennifer Hart, said the field is hard to define.

“Digital humanities scholars sometimes refer to it as a big tent, incorporating the range of people who come to the field from varying paths and with different abilities and interests,” Hart said.

Hart said the easiest way to define digital humanities is by breaking the subject into four primary categories.

Hart explained the minor was specifically designed to be accessible for any major  — claiming the minor includes courses from five different colleges and 12 different departments.

“Students from the humanities can spend time building technical skills like programming or geographic information systems, while students from non-humanities fields get the opportunity to take exciting humanities classes that incorporate technology in all sorts of new ways,” Hart said.

Dean of the College of Liberal Arts and Sciences Stephanie Hartwell said the minor’s academic range embodies the college it’s a part of.

“Interdisciplinary scholarship is at the heart of the College of Liberal Arts and Sciences and that's part of the beauty of this minor as well,” Hartwell said.

“I think out of all of the electives I could take, this had the most real life implications to it,” Brynaert said. “I think anyone would benefit from having this digital humanities class because it teaches you how the internet and everything works in an internal and external sense.”

The most exciting thing she’s learned from the class is metadata, Brynaert said.

“So far the most interesting thing is how metadata works and just all of the things you have to think about when planning a website for it to be intuitive,” she said.

Digital humanities is offered as both a major and minor at other renowned universities across the country. Some examples include Massachusetts Institute of Technology, New York University, Loyola University and Duke University.

“Our goal was to create a program that fits the current realities of faculty and resources at Wayne State, while also creating space to grow and change,” Hart said.

The most important aspect to the program’s success, according to Hart, is student enrollment.

“It would be great to eventually have a major, but we need to build interest and capacity one step at a time,” Hart said.

Arben Gacaferi is a contributing writer for The South End. He can be reached at arben.gacaferi@wayne.edu.