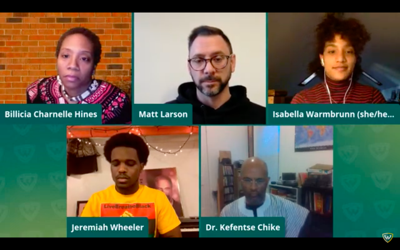 Wayne State University hosted “Looking Ahead to Juneteenth: Discussing the Past, Examining the Present, Considering the Future” via Zoom on Thursday. The virtual event was a discussion of Juneteenth’s significance and its emerging recognition as a holiday.

Moderated by Billincia Hines, associate professor of theatre, the event began with a brief history.

Juneteenth is the celebration of the end of slavery in the U.S., said Kefentse Chike, professor of African American studies. On June 19, 1865, news of the Emancipation Proclamation, signed by President Lincoln in 1863, reached enslaved Texans by way of the Union Army.

“Known as Freedom Day, Liberation Day and Emancipation Day — it’s a holiday celebrating the emancipation of those who had been enslaved in the United States,” Chike said. “It originated in Galveston, Texas, and is now celebrated annually on the 19th of June throughout the United States with varying official recognition.”

While Juneteenth is a popular holiday amongst the Black community, the U.S. has failed to make it a national holiday, Chike said. However, momentum for its official recognition is building.

“It is not officially recognized by the federal government although the Senate unanimously passed a simple resolution in 2018 in honor of the day, and legislation has been introduced in Congress several times to make it either a national day of observance or a full-scale federal holiday," Chike said. "And it is actually acknowledged formally as a holiday by some states as well."

The WSU Board of Governors approved Juneteenth as a university holiday on Sept. 26, 2020 following Student Senate efforts.

Isabella Warmbrunn, a master's student in the WSU School of Medicine, was one of the sponsors of the Student Senate resolution.

“The petition for the Juneteenth recognition, I really just wanted to get people on board with it,” Warmbrunn said. “I didn't think it was going to get to the point we got it. I'm really happy with Wayne State continuing to listen to students of color, marginalized communities and hearing them when they say we need the support for this day or we need more support.”

The recognition of Juneteenth by WSU is a step in the right direction, but panelists said this effort is not enough. Changes need to be made to the Department of African American Studies, said Jeremiah Wheeler, president of WSU’s Black Student Union.

“Every piece of the Black Power Movement is partly rooted in Detroit, but the African American Studies Department does not reflect that,” Wheeler said. “Although we have awesome staff, and awesome care and everything, as a collective... I think we have to challenge ourselves and the university leaders to continuously challenge themselves to what more can we do for the African American Studies Department."

The event also discussed pressing issues within the Black community, namely issues surrounding the criminal justice system. Black people makeup only 13% of the U.S. population, but 35% of the prison population, Hines said.

“In fact, the 13th Amendment abolished slavery in the United States except for those who are found to be criminal under the law,” Hines said. “This is a dangerous loophole, and it has helped pave the way to our current era of mass incarceration and the systemic oppression of Black people through over criminalization.”

These alarming statistics are no mistake, but a way to continue to limit Black and brown people in the present-day, Chike said. The inclusion of that loophole in the 13th Amendment to the U.S. Constitution was intentionally designed to perpetuate the enslavement of African-American people, or some variation of slavery, Chike said.

“If you control the institutions, then you have the ability to interpret the law and apply to various institutions in ways that you choose to,” Chike said.

When it comes to taking a stand against issues the Black community faces, people must be aware of the injustices, said Matthew Larson, associate professor of criminal justice.

“Advocacy needs to have teeth for its impact to be meaningful, and before we address the issues of harm to communities driven by a criminal justice system… we need to understand intimately what that harm looks like,” Larson said. “So, beginning to educate ourselves has to precede advocacy, at least it should in an ideal world.”

This looks different from person to person, Wheeler said. It is important for people to hone in on their individual skills to educate people on these issues.

“Step in and step up – that’s our everyday commitment,” Wheeler said. “There’s some talents that you have, there’s some abilities, there’s some exposure that you’ve had that’s unique to you. You really need to step into that, and when it comes to the struggle … you’re not executing if it’s not connected to the community and the greater good.”

The recording of the Juneteenth panel can be found on the WSU Live Events website.