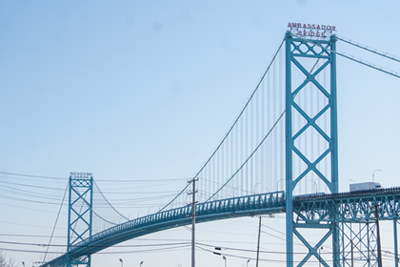 Canadian students attending Wayne State have been impacted by the border closure and travel restrictions due to the COVID-19 pandemic, adding to an abnormal fall semester.

Restrictions were put in place on March 18 and have continually been extended each month, according to the Associated Press. The most recent announcement extends the closure until Oct. 21.

Travelers exempt from the 14-day quarantine are people considered essential workers by the government of Canada, according to Canada Border Services Agency.

The U.S. government is not requiring Canadian students who cross the border for educational purposes to quarantine when arriving. However, Canadian citizens crossing the border back into Canada must initiate a new 14-day quarantine period upon arriving home.

Ashley Doka, a senior biomedical engineering major at WSU, commutes from Windsor, Ontario to her job at the Karmanos Cancer Institute, she said. With the increased risk of COVID-19 in the U.S., she is more selective about crossing the border.

“In the past, I would cross simply for quick individual tasks like going to go get a form signed, study in the UGL or pick something up,” she said. “Now, to limit the amount of time spent in public places, I would aim to cross only when I have multiple things to do at once.”

Doka said she believes it is reasonable to implement the border restrictions to protect individuals in both countries. People with a valid reason to cross the border have not seemed to have trouble doing so.

“I do sympathize for Canadian individuals who do not work or study but have family in the U.S that they are not able to see with these restrictions,” she said. “I hope in the future these individuals can be included in the next stage of allowable entry with appropriate safety rules in place.”

Every two weeks, Alyssa Woodall, a senior public health major at WSU, commutes to campus from Windsor, Ontario for an in-person lab.

Working at a pharmacy in Windsor, Ontario and having to cross the border to attend classes poses a challenge, Woodall said. The hardest part is the mandatory two-week quarantine.

“The pharmacy does not have a backup (worker) for the essential service I provide in the Windsor-Essex community,” Woodall said.

Woodall said she hopes to be exempt from quarantining each time she crosses the border and thinks the restrictions are unreasonable.

“The explanation they gave me at the border was that once I crossed into the U.S., they did not know where I was going and couldn’t control that so it was too ‘high risk,’” she said. “Yet, I know so many people who work over there (in the U.S.) and go wherever they please within the U.S. and do not have to quarantine upon coming home (to Canada)… I am going to one lab class.”

“I think the only concern is the actual border,” she said. “My lab class has taken more than extra precautions to ensure our safety.”

While she has to attend class in-person every other week, Woodall said her professor is letting commuter students virtually complete the labs so they are not missing work and can continue their daily lives.

Regardless, the restrictions “will impede how much I am able to learn from that class,” she said.

For more information, the Government of Canada created a webpage for Canadian students attending school in the U.S.