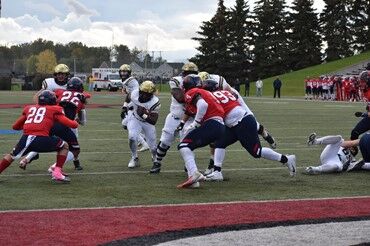 The Warriors got off to a fast start by marching the ball down the field and scored when redshirt freshman running back Myren Harris threw a 2-yard touchdown pass out of the wildcat look to redshirt senior tight end Nick Poterack.

On their following possession, after forcing SVSU to a quick three and out, WSU managed to get points again. Redshirt freshman kicker Griffin Milovanski hit a 40-yard field, putting the Warriors up 10-0 at the end of the first quarter.

SVSU took the momentum and scored in under a minute at the start of the second quarter, putting the game at 10-7.

Like the Warriors in the first quarter, SVSU answered on its ensuing drive and made a field goal, tying the game at 10-10 with four minutes left in the quarter.

SVSU followed up with another scoring drive where they marched the ball 55 yards down the field and scored on a 6-yard run giving them the lead.

Head coach Paul Winters said his team started out well but couldn’t get going in the second and third quarters.

“We came out playing well, got a 10-0 lead, shut them down on defense, moved the ball on offense, and then we went into a lull on offense and had some good field positions that we didn’t take advantage of, and we missed some opportunities,” Winters said.

SVSU got the ball to start the third quarter and was hot from the beginning. They drove the ball from the 25 yard line into WSU territory and ran it into the endzone on an 8-yard carry.

This gave SVSU a lead with the score at 24-10, and neither team would find the endzone again until the fourth quarter.

The Warriors gave up a total of 227 rushing yards in the game and were susceptible to frequent big chunk yardage plays to SVSU.

Winters said his team was not playing as well as SVSU, offensively or defensively.

“We didn’t execute the run game the way we needed to, which put more pressure on the passing game,” Winters said. “And from a defensive standpoint, we just couldn’t get the stops.”

Winters said he attributed WSU’s disappointing run defense to redshirt senior defensive tackle Damani Green being out due to an injury.

“We didn’t have Damani Green, our number one d-tackle, which really stops people from running up inside of us, so that hurt us too,” Winters said.

With Green out, other Warriors came in to fill his presence, which is not easy to do, Winters said.

“It’s not that they have to step up more, it's when you lose a main guy any time that happens everybody has to step up but they also get more reps and more tired you know? You just don’t have that stud in the middle that takes some of the pressure off of everybody else,” Winters said.

While the third quarter only resulted in one touchdown, both teams found the endzone on multiple occasions in the fourth quarter.

SVSU struck first, executing a total of eight straight running plays for 50-yards and a touchdown. This put them up 31-10 with over seven minutes left in the game.

On the following series, redshirt junior quarterback Chase Churchill threw an interception, which cost WSU its field position. SVSU capitalized and kicked a field goal, putting the game further out of reach for the Warriors.

But the Warriors wouldn’t give up without a fight. On their following series Churchill led them down the field through the air and connected with Poterack for a 5-yard touchdown pass.

SVSU answered as well, with a seven-play drive. This consisted of 49 rushing yards, with one of them being a 24-yard touchdown.

Again the Warriors wouldn’t back down. With a minute left in the game, they managed to drive the ball 72-yards down the field and scored. Churchill connected with redshirt sophomore wide receiver Jesse Prewitt III on a 26-yard touchdown reception.

Winters said he was proud of his team’s effort.

“Our guys, they've been like that all year. They’ve never given up, they've never turned on each other, they're going to fight and do everything they can, and you can hear them on the sideline, they’re cheering for the guys on the field,” Winters said. “They’re 100% fighters, Warriors.”

The Warriors (1-7) look to get look to get their second win on the season against Northwood University (1-6).

The next game will be held at Tom Adams Field on Oct. 30, with kickoff set to go at 6 p.m.

David Carter is the sports editor for The South End. He can be reached at gq1784@wayne.edu.