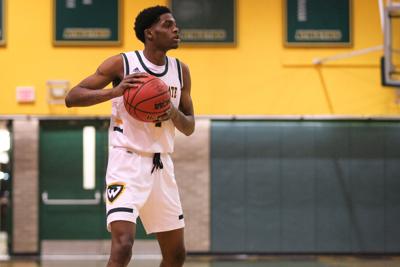 WSU, after just playing a game last Saturday, had little time to begin preparing for their opponent ahead of Tuesday. It felt like they were preparing to play both teams, Head Coach David Greer said.

“Even though we were playing Northwood (University), we also had to prepare for Ashland. We had to get ready to play two teams. And Ashland is a different type of team, they’re a big and physical team, so we knew it was gonna be challenging,” Greer said.

The opening 10 minutes were similar to other games this season for WSU, featuring opening baskets from their scoring stars, junior guard Darian Owens-White and senior guard Brailen Neely.

At the game’s eight minute mark, as both teams were tied at 8-8, AU began to pull away due to sloppy defense from WSU. AU went on a tear, controlling the tempo and scoring two three-pointers en route to a 14-6 run that put them up 25-17.

Sophomore forward Avery Lewis then took the lid off the basket by scoring a layup. What then followed was a lockdown defensive performance to end the first half, where WSU also went on a 6-0 run. That run put WSU behind by only two points to end the half.

WSU and AU traded baskets until the 14-minute mark in the second half. It was then that AU began to find their rhythm and went on an 11-2 run, giving them a 43-34 lead. WSU was trying to crawl back into the game with seven minutes left to play in the game, only to fall back to having a nine-point deficit on their hands, as they trailed 47-38.

WSU then fell back on their defensive effort, and it paid off as they stifled every shot that was coming their way. With a rebounding effort led by Lewis, who finished the game with 12 rebounds, and junior guard Antonio Marshall, WSU tied the game at 50-50.

Marshall, who finished the game with 11 points, eight rebounds and five blocks, has had difficulties maintaining a steady flow all season. Greer said he was pleased to see Marshall finally playing in his element and making such a difference on the defensive side.

“Antonio has that kind of ability, he’s long and lengthy like that. He’s capable of changing the game from a defensive standpoint, but he’s just gotta be a bit more consistent,” Greer said.

WSU continued to relentlessly attack the paint while pinning down AU’s defense. AU was forced to call a timeout as they were on the worst end of a 14-2 run at the hands of WSU.

It was to no avail, WSU continued to bully AU on the inside. WSU kept getting to the line, weaving through the defense and finding easy baskets near the rim.

After a devastating finish last week at the buzzer, WSU seemed determined not to let go of their lead. They called a timeout with 24 seconds to regroup as they were up by six points.

Neely forced a steal, and after dishing it out to Owens-White, WSU was sent to the line with a chance to close the game out. This time, Owens-White hit both free throws and sealed a victory for WSU.

In the final three minutes of the game, WSU went on a 13-0 run. In the second half, they shot 65% of their shots, a massive improvement from their 37% shooting in the first half.

Greer said he was pleased by the outcome and his team’s ability to maintain composure on both ends of the ball.

“I was very proud of our guys down the stretch. Especially coming off such a disappointing loss on Saturday, you didn’t know how we would respond but we were up to the challenge,” Greer said.

Owens-White, Neely and Marshall consistently play 40 minutes a game, but Greer said he hopes to pull others off the bench moving forward.

“Those guys are playing too many minutes and they just sorta wear down. We gotta get more consistency off the bench. We gotta put them in there and have them build some confidence, and start building some trust because we’re gonna need them,” Greer said.

WSU will be traveling to the Grand Valley State University Fieldhouse Arena to take on GVSU on Jan. 30 and Jan. 31. This weekend could determine who takes control of the Great Lakes Intercollegiate Athletic Conference South Division as both teams enter the weekend with their records tied at 4-3.