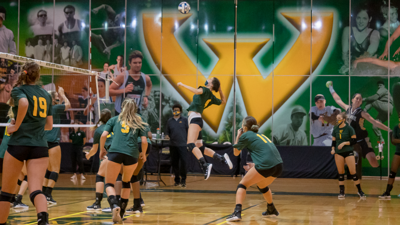 For the first time since Nov. 23, 2020, Wayne State University volleyball returns to competition. This season is full of hope, but for student-athletes, they're just thrilled to have the opportunity to compete.

Last year, WSU went on a seven-game winning streak before falling in the second round of the Great Lakes Intercollegiate Athletic Conference Tournament to Ferris State University. WSU ended with a 17-12 record and 9-7 in the conference.

Under Head Coach Tim Koth's leadership, WSU looks to exceed expectations in the GLIAC. WSU was picked to finish third in the South Division in the GLIAC, but Koth said he has all the confidence in his team to start the season.

"On paper, we're an extremely talented team and we should be the favorites to win the conference," Koth said.

Junior setter and team captain Kamryn Duffield said last season was important for the team and will translate to how the team performs this season.

"We built a foundation and relationship last year. We all have a common goal, so I think it's going to be a really good year for us," Duffield said.

WSU enters the season with a combination of veteran leadership and young talent, returning 14 players and adding two freshmen.

Now in his seventh year at WSU, Koth said he is proud of the environment he has helped cultivate within his team.

"I really build my program on that close-knit type of culture. We've recruited kids who have complimented each other well," Koth said.

This atmosphere was emphasized by Breault. She said the team's most significant asset is their bond.

"Our biggest strength is our chemistry. We're good friends on and off the court, and we all have each other's back," Breault said.

While the team is ready to step back on the court, there have been significant changes since the 2019 season. The GLIAC announced that each team will play back-to-back games against the same opponent. The regular-season schedule was cut in half compared to the 2019 schedule, with 29 games being cut to 14.

"I'm actually really excited about that. We'll have to make our adjustments on the fly like the days before film," Koth said.

While the changes can be thrilling, there's little room for error for WSU. Duffield said Koth stressed the importance of a positive start to the season.

Koth said his team would conduct a different method of setting goals this season, keeping WSU motivated and on the right path.

"We have a couple meetings regarding goal settings and talk about what we want to achieve. We normally have seven phases, but this year each week is going to be a phase," Koth said.

For Breault and the rest of the team, she said they're enjoying the chance to play and keeping a positive outlook.

"We go into every process with the mindset that this could be our last. We try to stay in the moment and not worry about the future," Breault said.

WSU will face Grand Valley State University for their home opener at the Matthaei Center on Feb. 25 at 6 p.m.

Cover photo of Rachel Malinowski going up for a spike during Oct. 16, 2020 Wayne State University volleyball practice by Quinn Banks, multimedia editor for The South End. He can be reached at multimediaeditortse@gmail.com.