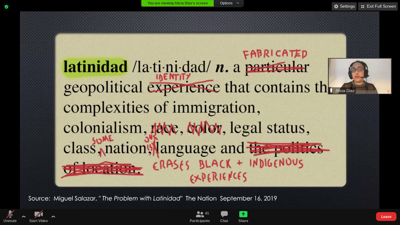 WSU professor for Latino/Latina and Latin American studies Alicia Diaz was the event’s speaker. Diaz is a Detroiter with African American and Puerto Rican roots.

According to the event flyer, the title of Diaz’s lecture was taken from the 2006 book of poetry “Chocolate City Latina” by Esperanza Malave Cintrón, a Detroit native.

Diaz said work still needs to be done regarding understandings and acknowledgments of Blackness within Latino identity and its relationship to indigeneity.

Diaz showed a 52-second clip from The 1619 Project, a New York Times Magazine initiative analyzing the legacy of slavery on U.S. history. Diaz provided the project as an example of changing the way people approach conversations on Blackness in the Americas.

“The 20 human beings who arrived in Point Comfort left the African continent from what is now modern-day Angola. They were on a Portuguese slaving ship and they were part of an overall cargo of more than 200 human beings,” Diaz said.

The original destination of the ship was Veracruz, Mexico, Diaz said, but the ship was diverted to Virginia by pirate ships sent by the Queen of England. If the ship had reached Veracruz, the Africans would’ve likely been enslaved by the Spanish empire in Latin America instead of the U.S.

In Detroit, there is an interconnectedness between the city’s history and Latino stories, Diaz said. The initial Latino community of Detroit came from Mexico and Puerto Rico to work in the automotive industry, taking root near downtown Detroit, in Corktown.

As Latinos moved to Detroit in the 1920s, they faced racial segregation similar to Black residents, Diaz said. This was due to racist housing policies enacted by city officials.

Attendees were left impacted by the information Diaz presented, they said.

“Professor Diaz talked about the meaning of Latinidad and how the word alone has so much meaning and depth behind it,” said Jimena Morales-Veloz, a sophomore majoring in pre-nursing.

“The word could mean different things to many different people that all are Latino/a/x,” Morales-Veloz said. “I want to keep learning and exploring these types of topics more. I am a big believer that it is important to be well-rounded in all different types of cultures and the history behind them.”

Alondra Cruz, a sophomore majoring in education, said she has faced discrimination within Latino communities.

“As an Afro-Puerto Rican, most of the time I feel as if my Blackness is ignored in the communities that I am in. Alicia always encourages you to take space and be unapologetic about it,” Cruz said.

“I am Latina and grew up in a predominantly white community where we didn’t really get to learn about a lot of different cultures. But ever since I attended Wayne I have been introduced to the history and impact of many cultures,” Morales-Veloz said.

Diaz said future generations should understand the impact of African peoples on the world.

“The peoples of the African diaspora, they didn’t transform a continent…. we transformed, collectively, a planet,” Diaz said.