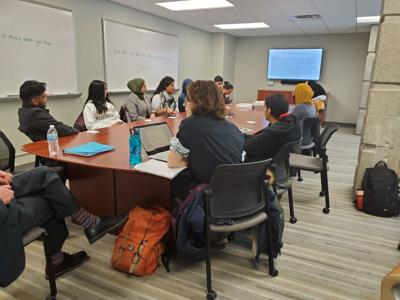 Wayne State’s Students for Justice in Palestine held their first general body meeting of the semester to discuss free speech and hate speech in light of targets against SJP.

As previously reported by The South End, The David Horowitz Freedom Center- described by The Southern Poverty Law Center as an anti-Muslim hate group- dispersed 1,000 flyers on across campus in November 2019.

The flyers specifically targeted SJP and Rep. Rashida Tlaib with accusations of terrorism and anti-semitism.

“They give everyone a bad impression before they have the opportunity to see (Students for Justice in Palestine) and that’s even if they want to come and see us after all that. It’s very disappointing,” Shkoukani said.

Dean of Students David Strauss said he was grateful for the opportunity to speak with SJP.

Strauss was quoted in November, recognizing the free speech rights of the DHFC, while also reaffirming the university’s commitment to its students.

“It’s free speech. I’ve seen the flyers. Individuals are certainly welcome to utilize flyers as their method of free speech,” Strauss said. “Diversity and inclusion is one of the fundamental tenets of our university mission. It is foundational to who we are. We support diversity, we support free speech, and we support safety. If anyone feels unsafe, contact the university immediately. There’s always that balance between free speech and safety and we take it very seriously.”

Several SJP members expressed their desire for WSU to have made a public statement specifically supporting Palestinian and Arab students.

Shkoukani said she wasn’t previously aware of Strauss’s statement in TSE and would have liked to see WSU support SJP in a more widespread manner.

“I feel like (the) university should’ve done a statement publicly,” Shkoukani said. “I wish they would’ve addressed Palestinian students more specifically because we were specifically targeted.”

The distributed flyers named former and current SJP members and called them anti-semetic and claimed they are a part of “WSU’s agenda to promote Jewish hatred.”

Strauss responded by stating that WSU's core values include a commitment to "celebrate diversity and inclusion."

Ideas were shared on the best way for SJP to address the hate speech moving forward. SJP members discussed the idea of taking part in educational outreach to inform the student body about the student organization’s missions and how to identify and deal with hate speech.