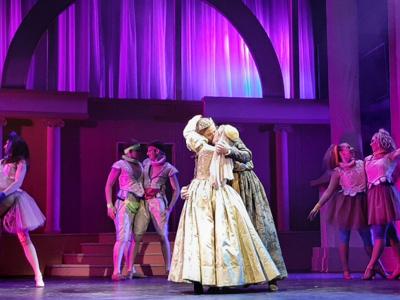 The Maggie Allessee Department of Theatre and Dance held performances of the musical “Head over Heels” from April 15 to 24 at the Hilberry Theatre.

This is the Theatre and Dance Department’s first in-person musical since 2019. The 2020 musical “Mary Poppins” was canceled due to the COVID-19 pandemic and in 2021 the department hosted a virtual musical “Trivoya Gold.”

“I haven’t been in a musical since 2018 actually, and I missed how much fun putting together a musical is,” said Xueyun Findlay, senior theatre major and chorus member in the musical, in an email to The South End Tuesday. “It was very difficult but the end result was so rewarding.”

Junior Alexis Pratt, who played princess Philoclea in the musical, said being back in-person has reminded her how to perform on stage.

“I did do a little bit of Zoom theatre but it’s nothing compared to being in person and getting to be around other people, look them in the eye and share the chemistry,” Pratt said. “I think on Zoom it was a lot of facial acting but when you get on stage and you realize there’s a lot more to control.”

“Head over Heels” was written by Jeff Whitty and adapted by James Magruder and is an original broadway production based on “The Countess of Pembroke’s Arcadia.”

Jill Dion, director of the musical and a lecturer in the Theatre and Dance Department, said the performance commemorates the LGBTQ community.

“It’s a beautiful celebration of the LGBTQIA+ community which has not been so openly celebrated in educational theatres in the past,” Dion said. “I think that’s something that’s very special about the production.”

The musical takes place in the 16th century and features songs like “We Got The Beat,” “Vision of Nowness,” “Get Up and Go” and “Beautiful” from the The Go-Go’s.

The story follows the adventures of the Arcadian royal family and their journey to save their kingdom by finding love through the exploration of sexual orientation, relationships and gender identity.

Pratt said she enjoyed the exciting experience the musical brought her.

“It’s been amazing to be back. Every night that I get to do it (the show) is an absolute blessing,” Pratt said. “I loved this character and I love everybody that I shared the staged with and anytime I was able to dance, it was so much fun.”

The production was enjoyable but exceedingly challenged by the pandemic, Dion said.

“It really has been such a joyous process. Not without difficulty,” Dion said. “We shut down rehearsals right before tech (week) due to COVID so we had to very quickly get it up on its feet. . . but we did it.”

Findlay said the musical conveyed a message of acceptance and inclusion.

“I hope audiences saw all the joy we held for the show while they were watching it. This show is all about total love and acceptance for yourself and others as they are, which is a beautiful thing,” Findlay said. “I hope people feel more open-minded about love and personal identity after seeing ‘Head Over Heels.’”