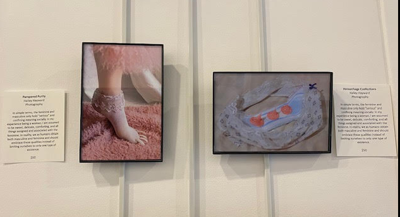 Wayne State alum Hailey Hayward explored the complexity of femininity in her artwork being featured at The Guild of Artist and Artisans' “fluid. man. woman. and the space between.” exhibition at Gutman Gallery.

Located in Ann Arbor, the show features 26 pieces from 16 different artists using a variety of mediums. The exhibition will be on display through June 18.

The exhibit focuses on the difference between masculinity and femininity, and if that difference is meaningful or meaningless, Hayward said when describing her piece.

“I have two photographs,” said Hayward. “One is ‘Pampered Purity,’ which is the foot with toenails growing out of the sock and then the second piece is called ‘Hemorrhage Confections,’ which shows panties with a pad with pink icing on it which represents period blood.”

Hayward said her photographs capture the expectations women are often expected to live up to.

“I definitely want viewers to feel a sense of disturbance through my pieces even though they are taken in a way that’s so feminine and hyperfeminine,” said Hayward. “Through the pinks, the textures, and the colors, it resembles the expectations to be these delicate sweet creatures all the time.”

Emilia Nawrocki, an artist also featured in the exhibition, said Hayward’s artistic style gave an accurate portrayal of the expectations placed upon women in today’s society.

“Hailey’s vision of the world through her photographs is pastel, fleshy, and overly sweet to the point of sickness with a hint of honest, girly despair,” Nawrocki said. “Hailey’s work speaks to the twenty-first century American ideals of what is expected of women: from a baby swaddled in pink, to the adulthood exhaustion from societal pressures, women are nurtured into femininity being an end-all-be-all of their human existence.”

Hatfield said Hayward’s artistic talent is obvious and should she pursue a career in the industry, he can picture her success.

“I am so encouraged by her, and other young artists like her. It’s not just her talent but her commitment and hard work to both developing her own artistic practice but also engaging with the public and going out there and getting her work out there and making things happen that makes me absolutely confident that her success is just going to continue,” he said.

Moving forward, Hayward said she will be shifting the focus of her work to live performance.

“I really like to tap into the idea of performance in my work and having that sense of curated reality. Now as an artist recently graduated, I think I’m going to dive deeper into actual performance instead of using photography as a documentation of performance,” she said. “I’ve been starting to do more live work and filmed pieces which I’m very excited about releasing.”

Marina Johnson is a correspondent for The South End. She can be reached at newsreportertse2@gmail.com.