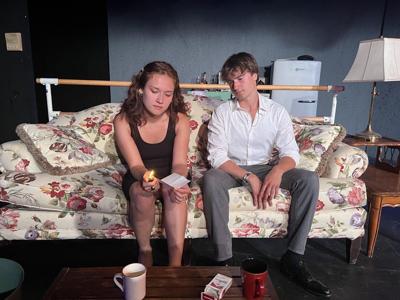 The Maggie Allesee Department of Theatre and Dance is opening its Summer Underground Series with “Burn This” at the Underground Theatre at the Hilberry.

Written by American playwright Lanford Wilson, “Burn This” takes place after the U.S. AIDS epidemic in the late 1980s and follows the love and grief of two roommates in Lower Manhattan.

Wayne State theatre majors Ashley Poulin and Skylar Deming direct the play, which has a cast and crew of 11 students.

Poulin said the play is special to WSU because it is completely student-run.

The cast had two months to rehearse, during which Poulin said she was attentive to creating a positive growth environment.

“Skylar and I essentially have these open discussions and dialogues in our rehearsals, making sure those rehearsals are safe spaces for the actors to take risks and challenge these themes — to step into these very vulnerable roles in very larger-than-life characters,” she said.

Cast member Quinn Hysni plays Pale, one of the main characters in the play. He said the discussions brought depth to all of the characters.

“Their (directors) willingness to have these conversations and discussions with these actors about the different elements of the characters made the show what it is,” Hysni said. “Because it is a very deep and heavy show, so it can be a lot to absorb.”

When Hysni found out he was cast in the play, he said he was excited to join a team of actors.

“As soon as I was cast, I immediately just started doing anything and everything I could to prepare. I think we all were really excited from the get-go–even before rehearsals started–that we were going to do this,” Hysni said. “I think everybody was just super energized by it.”

The play is Poulin’s directorial debut at WSU and she said she is proud of the close bonds that were formed.

“We got so lucky with the group of people that are in our cast and on our crew. There’s such great communication between members on our team and people aren’t afraid to voice concerns,” Poulin said. “That’s the kind of environment I wanted to create.”

At the door of the Underground Theatre at the Hilberry, tickets for "Burn This" can be purchased for $15, cash only.

Hysni said he hopes audiences take away the importance of having empathy for others.

“If there had to be something that I hope audiences pick up on, is just the need for tenderness in everyday lives,” he said “Everybody needs to feel love, and care, and feel like they’re not alone.”