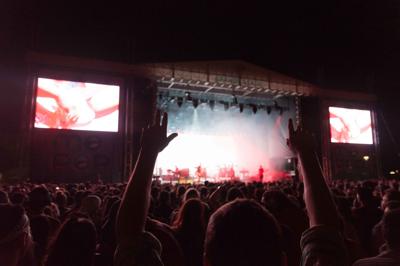 The 2019 Mo Pop music festival took place on July 27 and 28 at West Riverfront Park. Headlining this year’s festival was Vampire Weekend on Saturday and Tame Impala on Sunday.

Festival parking was sold out on Saturday with attendees having to park in surrounding neighborhoods and walk to the festival.

Rosalyn Reese, a Wayne State public relations major, said that her friends utilized parking at Wayne State and shared an Uber to the festival grounds.

“I love (Mo Pop) because I have a good time with friends but at the end of the day I’m just like ugh,” Reese said, expressing how she seems to run into speed bumps at the festival while still enjoying her time.

Alex McLenon, a 2018 Wayne State graduate, was excited to see Yellow Days and Tame Impala at the festival.

Roy Blair performed in the rain on Saturday with fans singing and dancing in wet clothes. It rained briefly during performances on Sunday.

McLenon also attended Mo Pop in 2018. “It’s been hot. It didn’t rain last year but the weather is about the same.”

Many artists talked during their sets on building connections with their fans and with other people at the festival.

During Liggins' performance, polaroid cameras were passed out to the audience with Liggins asking fans to take a photo with their friends, keep the photo and pass the camera on to someone else.

Like many other artists throughout the festival, Liggins signed autographs and met with fans after her performance. Attendees had a chance to meet Yellow Days and Tiny Moving Parts.

J.I.D, an Atlanta rapper signed to J. Cole’s Dreamville record label, played songs from artists he admired throughout his set. One of the songs he played was “Scenario” by A Tribe Called Quest which he samples on the song “EdEddnEddy.”

“I like playing samples before I play the original record. That’s just something I do,” J.I.D said. This gave the audience a look behind the scenes into how J.I.D creates his music.

Mo Pop signs at each stage discouraged those in attendance from crowd surfing and moshing. “Please be aware of your surroundings and avoid these activities and those associated with them, for your own protection,” the signs read.

This did not stop J.I.D from telling the audience to create an opening in the center of the crowd during his set, forming a large mosh pit.

The group utilized Jumbotrons to warp footage of their performance in psychedelic ways, an example being a third eye appearing on Parkers forehead during their encore performance. A light show accompanied some of their songs along with canons that rained confetti onto the crowd.

Detroit native, Lizzo, brought soul to the stage during her performance, asking the crowd “Are you ready to go to church?”

She was accompanied on stage by her team of backup dancers called “The Big Girls.”

“I’m about to say Detroit seven million times before anything because it feels so right,” she said.

While Lizzo showed her love for the city, Vampire Weekend was reminded why they should visit more.

In 2014, Vampire Weekend played the Meadowbrook in Rochester Hills. After five years without any Michigan performances, the band made their return.

The festival is searching for a new site to host its festival with West Riverfront park going to go through a $55 million renovation, according to the Detroit Free Press. The location has not been determined, but the festival will stay within the city.

Jack Filbrandt is the A&E editor at The South End. He can be reached at jackfilbrandt31@gmail.com

Cover photo by Jonathan Deschaine. He can be reached at jonathan.deschaine@gmail.com