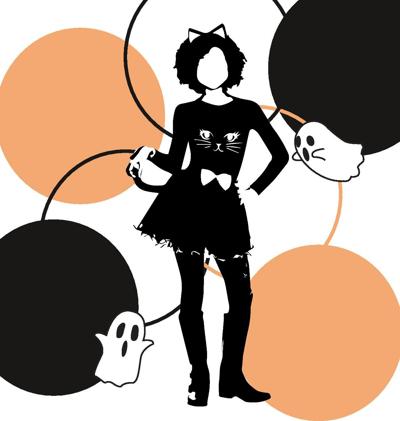 Halloween marks the end of spooky season, and if you don’t have a costume to get your scare on for tonight, here are some last-minute costumes fellow WSU Warriors plan to wear.

May your night be filled with pumpkin cookies and witches’ brew. The ghouls at The South End hope you have a happy Halloween.

Carmela Sleva planned on going as Dog the Bounty Hunter. Once she bleached her hair to reddish pink, she realized that she couldn’t do that look anymore.

Now she’s planning on being Princess Bubble Gum from the animated series “Adventure Time,” or pink chewing bubble gum — depending on what her time permits.

Yes, Sleva is going as “the pink chewy stuff students may find under the desk,” she said. To achieve this look, all you need to do is wear all pink garments.

To achieve the Princess Bubble Gum look, a dress would compliment the costume, however, it’s not necessary. To top the look off, wear a tiara that you can get from CVS or the dollar store.

Karnell Martin hopes that his costume will have a more positive effect on people rather than scaring them, he said.

He plans on wearing a black hoodie with a light-up mask “to light up the world,” he said.

The mask is an unknown monster with a bright mouth and LED lights, which allows Martin to change the cycle of the illuminating lights. The mask creates different illusions through the LED lights, he said.

He also plans to attend Youmacon in the costume — which will take place this weekend. He is still brainstorming other components, but he plans to wear skeleton gloves along with the mask, he said.

Whenever Natalie Escober tries to look for a last-minute costume, she scours the internet to draw some inspiration from, she said.

This Halloween, she plans to be a green dinosaur. The inspiration for the look comes from her high school medical teacher who she remembers had a dinosaur tail during Halloween.

Escober said her costume this year represents her silly personality.

If you’re in a time crunch, which you probably are if you’re reading this, then cut out about 15 triangles from a piece of green or yellow paper. Tape the triangle shapes on a shirt or headband so they’re sticking straight up. This will give the effect that you’re trying to look like a Stegosaurus instead of looking like you crammed for a costume.

Finn Osman is still trying to decide on his Halloween costume, he said. But, he has a few ideas to choose from.

He plans on being Timmy Turner from “The Fairly OddParents”or Kylo Ren from “Star Wars.”

He's still in the planning process of developing which costume he will choose, he said.

Timmy Turner's look is very achievable. For this costume, you will need a pink shirt and pink hat, and that's it! However, if you want to be the fairy godparents then this is also achievable.

Cosmo and Wanda are easy and cute costumes for any procrastinators. All you need for this costume is green or pink hair spray paint, which any drug store sells, and a pair of cheap wings from a costume store. You will also need a green or pink shirt, depending on which fairy godparent you want to be.

For Cosmo, a layer of green hair spray paint, a green shirt and wings will make you look exactly like him. To be Wanda, you will do the same process you would do for Cosmo, but replace all of the green with pink.

Lyndsey Maiuri created a costume that resembled Dorothy from the “Wizard of Oz,” she said. The inspiration came from childhood memories of being Dorothy for Halloween.

The dress that she's using to assemble the look is her graduation dress from high school, she said.

This costume will require more shopping in multiple stores in comparison to the other listed costumes. However, it’s still last-minute achievable. To be Dorothy all you need is a blue dress and red shoes, which you can easily pick up from Walmart or Value World. Also, if your hair permits then don’t forget Dorthy’s iconic pigtails.

Originally Nevin Shaffer planned to be Kermit the Frog because he can accurately replicate his voice, he said.

When it comes to Halloween costumes, waiting until the last minute to plan something to wear has worked for him in the past, he said.

If you’re jumping at the chance to be Kermit the Frog then all you need are green clothes and a green headband. Either you can crumple up two pieces of paper into a sphere or buy a Styrofoam sphere from a craft store, which usually ranges in price from cents to $5.

Draw Kermit’s eye slits on the spheres and tape them to the headband. After you’ve done this imperative step, put on your green clothes and headband and hop the night away because you are now Kermit the Frog.

“Procrastination is the best motivation in many of my approaches,” Nevin said.

Amanda Duren is a contributing writer for The South End. She can be reached at Amanda.Duren@wayne.edu.