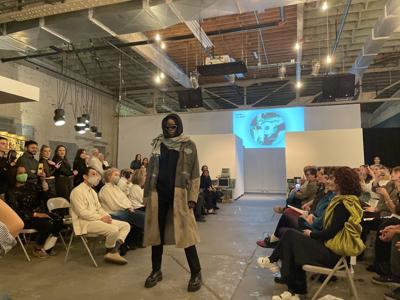 The Wayne State Fashion Design and Merchandising Organization resumed its annual Spring Fashion Showcase at the Museum of Contemporary Art Detroit on Friday.

The show features student designers and was suspended in 2020 due to the COVID-19 pandemic, preventing students from presenting their work for two years.

Broekman said opportunities like this are significant for student fashion designers and faculty.

“I think it is really important to have something to work towards, because if you're just in a class and learning to sew… you’re just doing that for class,” Broekman said. “This gives them something to work towards that isn’t just a grade, so there is like a reward at the end of the semester. People I feel will take more pride in their work if they know it’s going to be shown somewhere.”

“I think it’s a little bit different from the shows I’ve seen in the past, because before it might have been accessories or other things styled, but it wasn’t like every single look was handmade,” Benedict said. “These are entirely handmade garments from the designers. Every single thing you will see on the runway besides the shoes is made by Wayne State students.”

Prior to the pandemic, the event was held in St. Andrew’s Hall, but the location change was made because MOCAD is an established place in the Detroit community, Muszynski said.

“It’s super close to Wayne State and it’s nice to not be in some random building on campus…,” Muszynski said. “It welcomes more people that may not have attended in the past to come.”

Admission was free for the hour-long show, which began at 8 p.m. The event also featured a bar, cocktail hour and opportunities for networking with members of the Detroit fashion community.

Muszynski said she did not expect the show to sell out as fast as it did.

“We were not expecting that (to sell out) within the first couple weeks that we posted it on our Instagram and I think it is because people want to see what Wayne State students in Detroit are doing,” Muszynski said. “And it gives them an opportunity to just go do something. People just want to go out and it’s fun to get dressed up, listen to some music, get some drinks, and see some clothes. Especially after a pandemic, we all want to have meaningful experiences.”

“I always grew up loving clothes, so it just kind of worked out that this is my first time modeling,” Rhodes said. “Maddie, the designer, allowed us to choose our pieces and I chose something based along the color scheme that I typically wear. I really love the piece I chose because it’s really flowy and kind of stringy which is honestly something I’ve always wanted to wear, so it worked out.”

Designers were also invited through an open call online to submit their pieces. One of the designers selected was senior fashion design major Alex Brauer.

Brauer said his innovation for the piece came during a dark creative rut.

“I ultimately pulled out a lot of inspiration in regards to societal conflict, whether it be in politics or inequality and social justice,” Brauer said. “That’s basically what the highlight of the collection is about, and I thought what better way to represent that than with combat. That's where a lot of the key elements come into play with my designs.”

Benedict, Broekman, and Muszynski’s designs were featured alongside Brauer’s. The theme of each designer’s collection was unique to their style, showcasing an array of construction methods, materials, color palettes and textures.

Benedict said having an opportunity like this is especially important for seniors, visually commemorating the hard work they put in during their time at WSU and helping them make professional connections.

“It’s important for people to have those networking opportunities to get their work out there,” Benedict said. “We specifically invited people from the fashion industry and brought out all of our contacts. It’s really about, as we’re transitioning into our careers as young professionals in the fashion industry, getting that exposure.”

A livestream of the fashion show is available on the FDMO Instagram.

Theresa De Benedetti is a contributing writer for The South End. She can be reached at theresadebenedetti@wayne.edu.